Published On May 31, 2018 Published By Genevieve Dietz 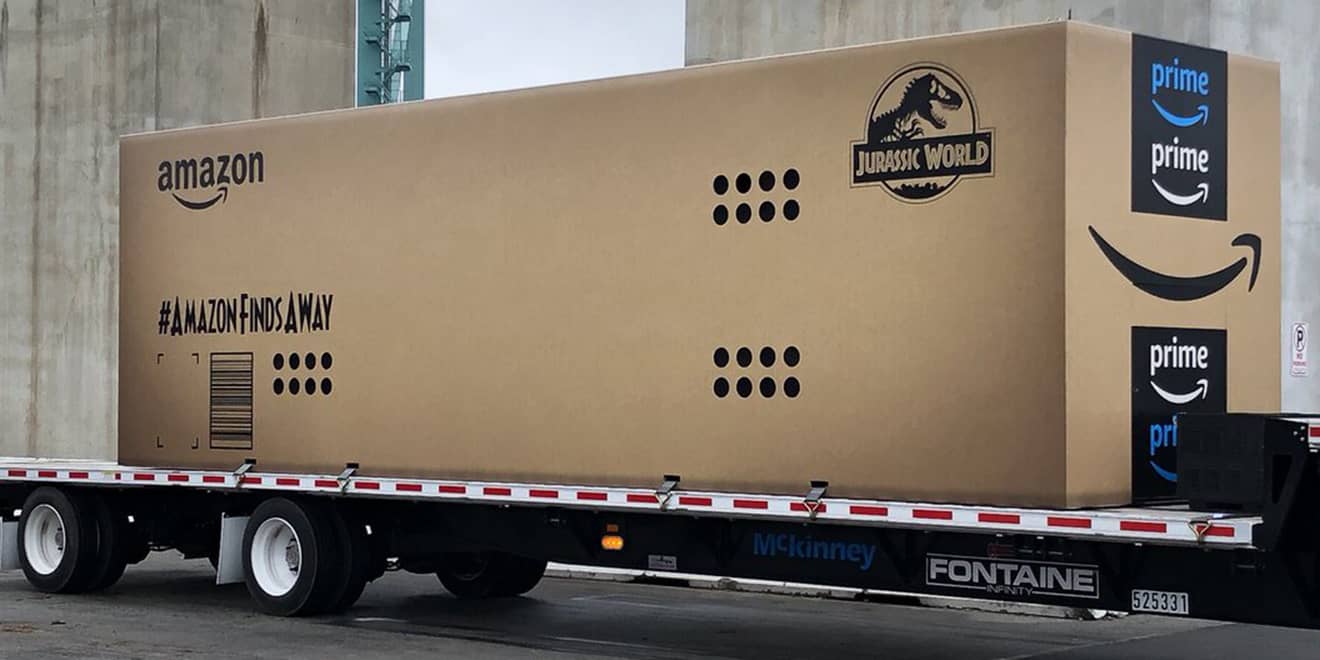 A mysterious Amazon shipping box seen being driven around L.A. yesterday has been capturing the attentions and imaginations of intrigued Los Angeles locals.

The box, a three-way branded stunt between Amazon, Jurassic World: Fallen Kingdom, and the Jeep Rubicon, features the signature Jurassic World logo on its side, numerous air holes, the hashtag #AmazonFindsAWay (a reference to the series’ first film), and an interactive shipping label that invites you to discover what’s in the box.

[bctt tweet=”Amazon goes Jurassic in triple-branded #marketing stunt involving a mysterious shipping box. Read on for all the details.” username=”relevance”]

The shipping label is made out to Owen Grady (Chris Pratt) and Claire Dearing (Bryce Dallas Howard), the two protagonists of Jurassic World: Fallen Kingdom. It features a QR SmileCode that people can scan using the camera icon in the Amazon app and it encourages passerby’s to ask “Alexa, ask Jurassic World what’s inside this box?”

Both elements activate a landing page with discounted Jurassic Park movies and a creative piece of video marketing that reveals the secrets of the box…dinosaur screeching included.

Unfortunately, the box doesn’t contain a T-Rex or any other dinosaur hybrid cooked up in the Jurassic World labs. Instead, it contains new shipments of exclusive Jeep Rubicon’s tied to the film.

Since the first film debuted, Jeeps have been the vehicle of choice for transporting tourists and staff through the prehistoric theme park and the upcoming sequel will feature a revamped version of the classic car.

According to Scott Pierce, a branded content strategist involved in the project, it took Amazon and Universal over a year to plan.

65 million years in the making, and over a year of keeping quiet.

So proud of our strategy, creative and production teams working with Universal to save the dinosaurs. #AmazonFindsAWay https://t.co/KJ2YLklwiG

This three-way, interactive promotion is about as inventive as physical and digital marketing can get. The box, video, and social media promotional tie-ins excel at instilling a sense of wonder in the hearts of viewers everywhere, both in Los Angeles and across the world.

The original Jurassic Park, released in 1993, changed the movie game. The groundbreaking special effects, the instantly recognizable score, the tight script, and the irresistible cast made Jurassic Park the cinematic legend it is today. What people tend to gloss over however, is how the film’s content marketing and promotion strategies helped make it not only an enduring hit but a household name.

The studio spent 65 million towards promoting the movie and over 1,000 unique products were created. In 1996 Universal Studios created themed rides for its Orlando park including ‘Jurassic Park: River Adventure’, a groundbreaking water ride that still attracts large crowds today.

Amblin VP Brad Globe and MCA/Universal VP Elizabeth Gelfand are responsible for creating the original film’s ambitious marketing campaigns. Globe in particular is credited with putting the Jurassic Park logo on any and all products associated with the film.

McDonald’s, an early Jurassic Park marketing partner, came out with several ‘Jurassic’ themed meal deals and kids toys. Coca-Cola, Panasonic, Kellogg, and numerous other brands popular at the time joined in on the fun and saturated the market with ‘Jurassic’ themed items.

When Jurassic World came out in 2015, fourteen years after the series’ third installment, we still saw the familiar toy tie-in’s and branded soda cans, but we also started seeing VR and AR campaigns, social and digital marketing campaigns, mobile apps, and more.

Marketing for ‘Fallen Kingdom’ is now in full swing and it’s likely that Universal will spring more marketing surprises on us in the near future. If Universal keeps ramping up their marketing efforts, who knows what will be in store for the series’ fifth, sixth, or even tenth installment (if people keep turning up for more ‘Jurassic’ movies that is.)

Marketing for big-budget studio films and major brands has become an ultra competitive game and campaigns for those sorts of efforts require some level of A.I. augmented reality, virtual reality, at the very least, interactive video integration to be seen as relevant.

However, it’s not just big brands that have to pay attention to those sorts of trends and expectations, small brands often benefit from entering the tech space early as well.

People appreciate when brands make an effort to create out of the box campaigns (no pun intended) and they tend to be more engaged with brands that use uncommon resources or platforms or emerging technologies to supercharge their campaigns.

Amazon’s Jurassic World shipping box generated mass amounts of engagement and L.A. natives were all over Twitter sharing photos and videos of the stunt in action.

Of course, a stunt like this takes a tremendous amount of funds and resources to pull off but the general creative qualities of it can be achieved on a smaller scale by any brand.

Elements that are present in Amazon’s Jurassic World marketing stunt can be easily adopted by marketers. It’s become insanely simple to integrate QR codes into marketing materials and companies like Amazon are making it easy for marketers to integrate Amazon Alexa into their promotional materials.

Plus, after some brainstorming, unique brand hashtags only take a few seconds to add to a social post and can help lure thousands of new users to your site.

In a nutshell, the more expensive a campaign is doesn’t necessarily make it a better campaign. Creativity is, of course, essential to content creation and that includes being creative in the way we utilize tech tools. Soon, as A.I., VR, AR, and other tech become cheaper to integrate, there won’t be any excuse for brands to be disconnected.

Do you think Amazon’s Jurassic World stunt was a marketing win? Let us know in the comments.

How B2B Brands Are Using AI to Generate High-Quality Leads