Since it’s inception in 2015, Amazon’s annual sales event known as Prime Day has become a full-blown cultural phenomenon. The online-only Summer sales spectacle features sharply discounted products and is comparable only to Black Friday, the shopping Battle Royale most of us begrudgingly participate in the day after Thanksgiving.

Last year, Amazon reported that Prime Day sales increased by over 60% compared to the previous year, a record-breaking number that cemented Prime Day as a yearly shopping tradition.

Naturally, expectations were high for 2018’s event but unfortunately, the billion-dollar company hit a snag shortly after the festivities began. Around 3 PM EST on Monday July 16th, Amazon crashed, leaving disgruntled visitors with variations of these cute, but frustrating landing pages. 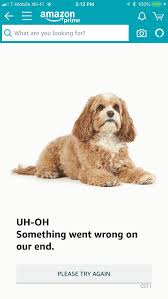 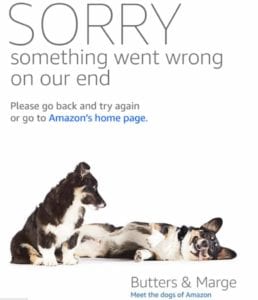 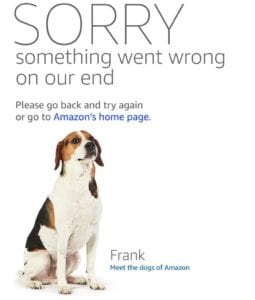 Not only were some visitors unable to access the site for a few hours, thousands were unable to use their Alexa-enabled devices and some had trouble streaming content on Prime Video. When connection was restored, some shoppers found that their shopping carts had been emptied and/or their transactions didn’t go through.

According to data provided by web performance monitoring firm Catchpoint found at TechCrunch,

“During the Prime Day outage, the home page was taking 6, 7 and even as high as 8, 9 or even 10+ seconds to load on the desktop. And on mobile, webpage load times were even slower – reaching as high as 30 seconds at times across the U.S.”

Catchpoint also reported that although issues improved by 4:50 PM EST, some shoppers were still getting error messages until 10 PM EST.

Despite this major snag, Amazon reported that sales had skyrocketed from last year. Bloomberg reports that,

“Spending jumped 89 percent in the first 12 hours of the event on the e-commerce giant’s website and app compared with the same period last year, according to estimates by Feedvisor.”

Although Amazon was able to bounce back in terms of sales, many shoppers took to social media to vent their frustrations, getting the hashtag #PrimeDayFail trending for a time.

Most of these frustrations stem less from the actual glitch and more from Amazon’s poor damage control methods. The company issued the following statement yesterday.

Dozens of users were dissatisfied with the company’s tone-deaf non-apology and stated that the response was a PR failure.

I'd suggest replacing your PR person – this is not a good message to the millions of #prime customers having issues. #badmessage #primeday #fail

So far, I haven’t been able to purchase anything but I think I have 18 dogs in my shopping cart. #PrimeDay #primedayfail 🐶 pic.twitter.com/4LjS664ChQ

A ‘Ruff’ Week for Amazon

While shoppers were stuck staring at dogs instead of making purchases, thousands of Amazon workers in Germany, Poland, and Spain abandoned their posts in a one-day strike. According to NBCNews,

“The Verdi services union called the one-day strike to back its demand for labor contracts that guarantee healthy working conditions at fulfillment centers run by the world’s largest e-commerce company.”

Amazon has been under fire for it’s less than stellar European working conditions for a while now and this highly publicized Prime Day strike is grabbing the attention of politicians here at home.

I stand with the Amazon workers fighting for decent working conditions and a living wage on #PrimeDay.

While Jeff Bezos' wealth increases by $275 million a day, Amazon workers are afraid to take bathroom breaks at work and are grossly underpaid. https://t.co/FRg0qz5ca9

This Prime Day strike and simultaneous crash may not have had a drastic impact on the company’s revenue stream but it has caused many users to lose faith in the site and threaten to cancel their Prime memberships.

All brands screw up at one point or another, it’s all part of the territory. Whether it’s a site crash, a malfunctioning product, or an inappropriate social media post typed haphazardly by a drunk employee at 3 AM, marketers have to figure out how to remedy tough situations, and fast.

Damage can happen without warning so damage control must be orchestrated in advance. Most consumers will not take pity on a company that has wronged them in some way. Even if an incident was purely accidental, they’ll expect companies to be apologetic at the very least.

[bctt tweet=”Damage can happen without warning so damage control must be orchestrated in advance. Read on for more… #PR #Marketing” username=”relevance”]

In moments of crisis like Amazon’s Prime Day fail, it’s important for the person or persons handling social media interactions to respond to user complaints as efficiently as possible. It may not be possible to respond to every reply but even a tweet or post encouraging users to private message your company with their concerns is better than nothing.

Not saying anything is one of the worst things you can do post-disaster but arguably, a poorly crafted message that places blame on another company or that shirks responsibility is even worse. As soon as an incident occurs, a brief message with a genuine apology can keep your audience on your side.

Ending that message with a brief plan of action is even better. If you don’t have a plan of action or resolution yet, be sure to end that initial message by saying that one will be coming and that you’re open to questions or concerns.

PR blunders may not hurt a giant company’s revenue too much (i.e. Amazon) but it can be disastrous for smaller companies. Being transparent with your audience will almost certainly improve user trust and by being on top of site errors, glitches, or other problems, your audience is more likely to weather out the storm with you.

What do you think about Amazon’s crash and subsequent PR blunder? Let us know in the comments if you would have handled things differently.