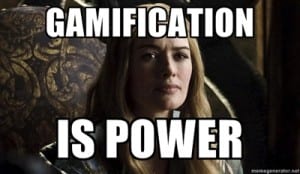 “When you play the game of thrones, you win or you die. There is no middle ground.” – Cersei Lannister

That may be a little extreme when discussing modern day gamification, but in terms of the Seven Kingdoms fighting for the Iron Throne, Cersei speaks truth. Game of Thrones not only deals with the aforementioned civil war but also the approaching winter and an exiled empire that has set its sights on the coveted throne. For the book and show fans out there, we may already know how these instances play out — but what if the quest for the throne really was a game? What if the citizens of each kingdom were motivated to be their best selves through collaboration and feedback in order to secure an epic win?

While teamwork and cooperation are integral elements in Game of Thrones, what if rather than fighting amongst each other, the kingdoms worked together to save Westeros and Essos? By digging deeper into this concept and checking out current gaming scenarios, we can discover how gamification fits into inbound marketing as well as George R. R. Martin’s wildly popular medieval fantasy novels.

Not only are games fun, but according to game designer and researcher Jane McGonigal, they also inspire and motivate us to do something that matters. “We feel we are not as good in reality as we are in games,” McGonigal said.

That’s a shocking statement! But the way she justifies it rings true: “By playing games we are changing what we are capable of.” This goes beyond your Sim never aging, or your avatar being able to fly in Second Life. McGonigal was likely referencing instances more like Terran and Protoss joining forces to eliminate Zerg in Starcraft; or Thott, of the guild Afterlife developing the Dragon Kill Points System used in MMORPG game Everquest. If gamers can work together to save races, planets, lands and worlds, why can’t we figure out how to do that and more in real life?

Leveling Up and Helping Out

Gamification is being used in real-life situations, and it’s proving to be successful. The University of Washington’s Department of Biochemistry and Center for Game Science created Foldit, “a revolutionary new computer game enabling you to contribute to important scientific research.” The goal was to produce a 3D model of a specific enzyme. Scientists were stumped on the solution for 15 years — but within 10 days, the gamers came up with a solution. Through sharing their results and improving on them, this gaming community shaved years off the research process.

This concept of gamification plays an essential role in inbound marketing as well. Inbound marketing is all about creating demand for your content and building an engaged community. The massively popular MMORPG World of Warcraft did just that: Not only is WoW the second most played computer game in the world, but it also boasts one of the world’s largest online content communities.

Now, let’s check out how an inbound marketing company uses gamification. Moz leverages user-generated content on The YOUmoz Blog. By doing so, not only does Moz now possess a vast wealth of information provided by their community, but that content has facilitated engagement by offering a voting system, the option to comment on articles, and the potential opportunity to be featured on the company SEO blog – all of which is only available to members. They’ve broken the permission barrier! Jackpot!

Obviously, teamwork like this is easier said than done. If it were simple, the Seven Kingdoms wouldn’t exist amidst civil unrest, but instead, they’d band together to thrive during a decade of winter and defend themselves from potential threats like the Dothraki army and (spoiler alert) dragons.

But as present-day inbound marketers, we have an opportunity to use the principles of gamification to create engaged communities, support their user generated content, and ultimately make clients successful.

2 Simple Ideas to Get Your HR, IT and Accounting Departments Blogging

[INFOGRAPHIC] An In-Depth Look at the Inbound Marketing Funnel