How To Put Business Jargon In Its Place 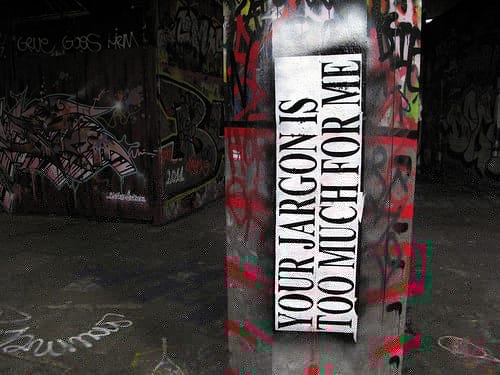 People like to complain about jargon. A lot. This is odd considering that anyone who has a job uses some kind of jargon — specialized vocabulary that is unique to a specific business or industry — every day.

As I see it, jargon comes in two flavors, which I call exclusionary and inclusive jargon.

Exclusionary jargon is the “bad” jargon. Rarely does it impart more useful information than simpler, plainer speech. Instead, it transmits a message about the speaker: I am a business professional. It’s an easy way to establish one’s qualifications — even for the unqualified.

Corruption of an existing word

Also in this category are words used to obfuscate, to hide either a lack of knowledge or a true but unpleasant fact. For example,

I call this a corruption of existing words, which, yes, shows my bias. If you find some sort of value in this type of jargon, you might describe it as “repurposing existing language to maximize lexical value in a business environment.”

Which is jargon for exactly the same thing.

This is what people really think about when they complain about business jargon — pointless new words and phrases that make the speaker sound more businesslike but really add nothing to the language:

Jargon like this reeks of subversion and misdirection, even when none is intended.

Inclusive jargon is the “good” jargon, a business shorthand that encompasses complex ideas and multi-step actions. It’s inclusive because it binds people of the group together to discuss complicated issues. Inclusive jargon is difficult to fake because, given any industry discussion, it will soon become clear if someone really doesn’t know what he’s talking about.

To get away from the negative connotation of jargon, inclusive jargon might better be thought of as an argot — an (often secret) idiom peculiar to a specific group of people. Argots can be extremely useful. For example,

Tune your words to your audience

One aspect of an argot is that it is usually a secret language or idiom, and this is an important aspect to keep in mind. In a business-to-business (B2B) situation, using your industry argot is perfectly acceptable — sometimes it’s expected — because everyone involved is “speaking the same language.”

But that’s where it should end.

In any consumer-facing (i.e., “public” or “business-to-consumer [B2C]”) interaction, that jargon needs to stop. Your industry argot needs to stay in the industry, and you need to switch to plainer, common language.

And remember: Anything you put on the Internet is essentially public.

This is where some businesspeople hit a wall. If you’ve been immersed in an industry and its terminology for a long time, it can sometimes be difficult to step outside that environment and speak about your business to people who know nothing about it.

This is what people complain about. When you speak to the average Joe using your “inclusive jargon,” it stops being inclusive. It blocks communication instead of benefitting it.

It’s dangerous for your argot, too. When industry terms get picked up outside the industry, the general public will redefine and dilute them for their own purposes. (Consider, for example, quantum.)

What can you do about it?

The language you use is like your wardrobe. You wouldn’t wear a suit and tie to the public swimming pool; it just wouldn’t be appropriate. In the same way, it’s fine to dress your language up in industry jargon when you’re conducting internal or B2B communications, but if you’re talking to the public, put on your jeans-and-T-shirt vocabulary.