Months of data scandals, criticism, controversial ad rules, and user abandonment have taken a monumental toll on Facebook, Inc. The social media giant lost as much as $120 billion (20%) in value Thursday; a massive blow to the company’s growth.

[bctt tweet=”Facebook lost as much as $120 billion in shares on Thursday, making it the steepest ever value loss in one day for a U.S. traded company. Read on for more details…” username=”relevance”]

“The stock dropped about 7% immediately after the earnings report was released, then plummeted to a loss of more than 20% as a conference call with analysts progressed”

This is the steepest financial loss the company has ever faced and the highest ever loss of value in one day for a U.S. traded company. Needless to say, it has analysts shocked and investors sideswiped. 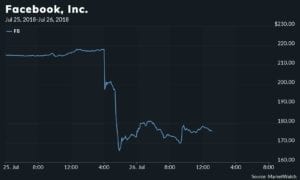 On Wednesday, Facebook reported lower than projected sale gains and fewer daily active users during its second quarter. It’s worth nothing that this quarter is the first full quarter since the Cambridge Analytica crisis began.

“The last time the company missed revenue estimates was the first quarter of 2015. But the results followed a period in which data-privacy issues came under harsh scrutiny, with Chief Executive Officer Mark Zuckerberg testifying before U.S. Congress for hours on the company’s missteps.”

The Nightmare is Far from Over

Facebook Chief Financial Officer David Wehner has revealed that he expects revenue growth rates to slip even further in the third and fourth quarters.

Aside from the Cambridge Analytica scandal putting a damper on the company’s reputation, the European Union’s implementation of its new General Data Protection Regulation (GDPR) resulted in fewer daily Facebook users from that region.

While this ongoing investigation hasn’t found any concrete evidence that Crimson Hexagon misused user data, the headlines are reminiscent of the Cambridge Analytica crisis and it’s possible that the news may have partially contributed to Facebook’s historic loss.

Despite these failings, Facebook has shown that they are willing to take further precautions in safeguarding user data, even if it comes at an inconvenience for marketers.

The company has started monitoring public pages more closely and on July 2nd, Facebook deprecated several apps and tools and added new AP restrictions in an attempt to help people protect their data.

As part of this new update, apps will have to go through a new review process to gain access to Facebook’s marketing API.

Facebook is also cracking down on malicious political ad content by requiring all marketers to undergo an extensive identify verification process before they can launch any ads related to politics.

The social media behemoth has also launched a new ad campaign advocating for data security and fighting back against fake news on its platform. The digital and TV campaign began in April and commercials and digital spots continue to roll out.

This campaign is clearly a bid to win back consumer trust but some critics of the campaign say that Facebook is not taking enough responsibility for letting data misuse and fake news plague the site.

The Youtube version of the commercial has over 4,000 dislikes compared to just 884 likes, which is proof  that a large portion of the public isn’t buying it.

These campaigns were clearly not enough to prevent Thursday’s dramatic share loss and it’s likely that Facebook will have a bumpy financial road ahead.

However, if the company continues to fight to regain user trust and appeal to advertisers again, it may have a chance to reset its revenue growth and exceed expectations like it has characteristically done in the past.