In the field of SEO, we’ve known for years that Google is constantly running new tests on how results are displayed. It’s quite common to see a font size change or ad placements being rearranged, only to see those changes disappear a few hours later. But 2015 has seen some dramatic and permanent changes to Google’s search engine results pages (SERPs) signaling to sites that it’s time to evolve or be left behind.

Directionally, they’re heading toward a “Her”-like personalized interface, minus the creepy love story, according to Google’s Gary Illyes in his keynote address at this year’s Pubcon. That means more personalized results, regardless of device and regardless of search query.

Let’s take a look at five significant changes to Google search results pages in 2015 that you may have missed but will irreversibly change the search experience.

1. Mobilegeddon: Be Mobile-Friendly or Perish

Okay, so it’s likely that you didn’t miss Mobilegeddon. Every industry news publication harped on it for weeks, threatening the end of the world as we know it. And then the dreaded day, April 21st, came and went, and we were mostly left wondering if anything happened at all.

There are a few likely reasons for this.

Regardless, the need for your site to be mobile-friendly has never been greater, and we’re not going back.

Then in August, after months of testing, Google launched the Local 3-pack (sometimes referred to as the snack-pack), which sits squarely above the organic results, expands, allows for search refinements, and greatly pushes organic listings down the page.

And this change happened in a big way. Literally overnight, the local three-pack overtook map results. This change also appears to be more pervasive, well beyond the traditional boundaries of local searches. (See item number three below.)

Why does this matter? Due to the placement on the page, combined with Universal results (images, news, etc.) and paid listings, organic results are being pushed well below the fold, resulting in lower click-through rates (CTRs).

Previously, local search results appeared for searches that went something like this: “ + ” e.g., “Austin running shoes” or “Chicago chocolate”. At most, you might see local results on your mobile devices for non-local searches, like “running shoes” or “chocolate.” Now you can see the the local three-pack for non-local searches on mobile and desktop, too—and they’re pushing organic results to the fourth position, decimating CTRs.

Note in the image below that the first organic result is now below the fold (the red line). 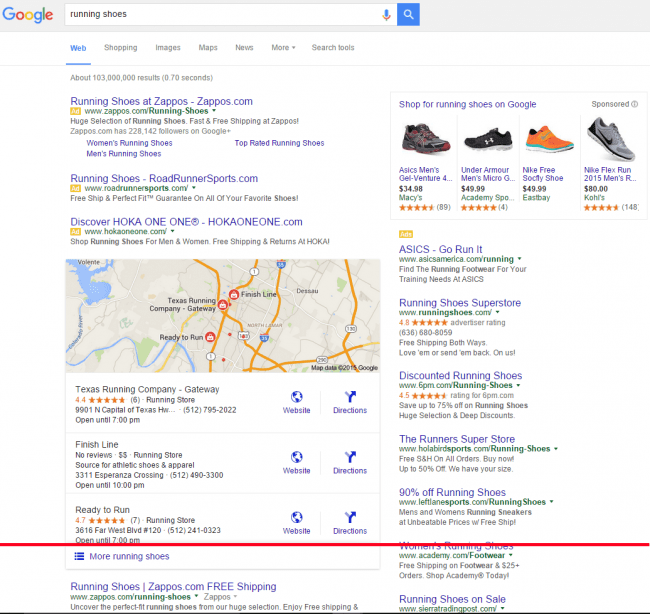 Sites that were previously unaffected by local search results (such as aggregators of hotel, storage and car listings) are now feeling the effects of this SERP layout change.

4. Knowledge Graph: From Many, One Answer

Google doesn’t want to just give you the top 10 answers to your queries. It wants to give you THE answer to your query. As a result, we’ve seen the display frequency of Knowledge Graph Answer Boxes increase to roughly 3.6 percent of the 80+ million keywords that we track at seoClarity on a regular basis. Eric Enge of Stone Temple Consulting recently reported a rate of 31.2 percent for his set of over 850,000 keywords.

The answer box is the large, SERP-real-estate-consuming box that they display for questions like, “What does bae mean?” or “How to tie shoelaces?” They can include direct answers to questions, or they can include recipes for common dishes.

The selection of pages worthy of populating the Instant Answer Box seems contrary to the standard ranking algorithm as well. In the example above, Google has selected the fifth organic result as the answer box content, providing a top-of-the-page link to the source of the content. In our studies at seoClarity, we see that answer box link garnering anywhere from 15 to 30 percent click-through.

Regardless of source selection or placement of the answer box, the Knowledge Graph continues to evolve, and the ultimate goal is for Google to provide you with THE answer to your query, not just a list of possible answers.

While these aren’t direct changes to the SERPs, you can be certain that the following advancements in technology will directly impact the search experience and move Google from being a search engine to being an answer engine.

In January of this year, Google acquisition DeepMind Technologies put its artificial intelligence technology to the test, and it amazingly mastered 50 Atari video games. This advancement in artificial intelligence is astounding. A thread from earlier this year on Reddit reminded us that this year marked the year on the Moore’s Law Graph that we would achieve the computational power of a mouse brain. I think mastering 50 Atari video games qualifies.

While Moore’s Law only accounts for transistors on an integrated circuit, it’s important to note that the technology behind computing is advancing as well—which leads to the next major advancement from Google.

Google Doubled the Number of Qubits in Quantum Computing

There are actual physical limits to the potential growth of computational ability if you rely solely on the number of transistors on an integrated circuit, hence the need to have computers that exhibit behavior beyond what classic physics allow. That’s where quantum computing comes in.

As reported in Wired magazine in September, Google has recently doubled the number of qubits—a fundamental building block for quantum computing—in its D-Wave computer. While Google and researchers at NASA are still trying to figure out what all D-Wave is capable of, you can be sure that a system that can operate outside of the normal limitations of standard computers will have a direct and amazing impact on the search experience of the near future.

Adding these technological advancements with Google’s other acquisitions in robots, 3D cloud-based rendering, drones, smart home technology and virtual reality, and it’s very easy to read the writing on the wall: we’ll have some form of virtual personal assistants in the near future, and the traditional search engines will be a thing of the past.

Is your company technically nimble enough to keep pace with the changes that are coming? Is your approach to marketing flexible enough to incorporate the new technologies and search experiences being driven by Google? Keep your eye on the horizon. Beyond it is a new world in which the user is the center of everything, and the personal assistants of tomorrow will be the gatekeepers that you have to appease in order to gain an audience.

Known for his affability and insightfulness, Keith Goode, Chief SEO Evangelist for seoClarity, travels the world speaking and writing about search experience optimization, democratization of SEO, and the future of search technology. With over nine years of experience in SEO and nearly two decades of experience online, Goode brings a diverse set of knowledge to his classes and conference topics.