How to Prepare Your Images for a Twitter Chat

So, Twitter chats… they don’t need images, right? You would be excused for thinking so, given how few actually use them. In fact, I just saw a Twitter chat being held by a huge organization, including interviewees who were extremely well known, and they didn’t even use images to promote it, much less during it.

Twitter is a pretty visual platform, or at least it’s definitely moving in that direction! While other social networks, like Facebook, have become visual by default, Twitter had a bit of an upwards climb in that regard. People were more likely to post hashtags than photos with their tweets.

A Twitter chat is reliant on engagement, which means both hype and live attention grabbing. Images can help you do that much more effectively.

Preparing images for the Tweet chat is a good idea if you are a host, featured guest or simply planning to attend. This is a one-hour commitment, so why not try to get more out of it?

Here are your steps for using images before, during and after your chat.

Step One – Promote With Visuals

As you hype up the chat, you should be catching the eye as much as possible. A strong visual or two can help with that. Take a nice background image and overlay it with text that gives the time and hashtag. Don’t give too much away, but instead use it alongside a link to a blog post with more details.

Share this image a couple times a day in the week or so prior to your chat. People will be more likely to retweet it with the picture attached than on its own. First Site Guide lists a ton of tools that can help you create those images.

Your guests are going to be a big draw when you have them as an interviewee. So why not take advantage of that? Post a couple of photos early on in the chat, or include them as part of your hype images you publish.

When your chat begins, you should have a nice introduction card that brings up the topic. It doesn’t have to be fancy, and can even be as simple as text on a colored background. That’s up to you.

It signals the beginning of the chat, and gives people going through it later a starting point on your feed for when the discussion began. It is also a kind of visual gavel, telling those waiting to pay attention because things are starting.

Just like the intro card, you can have a card for each new segment of the chat. Before you create a Twitter chat, you should have made a detailed agenda. This will have the topics broken up into parts, the time allotted to each part, and schedules in open discussion or question time for participants.

See how #CMWorld team is planning their Tweet chats: Awesome! 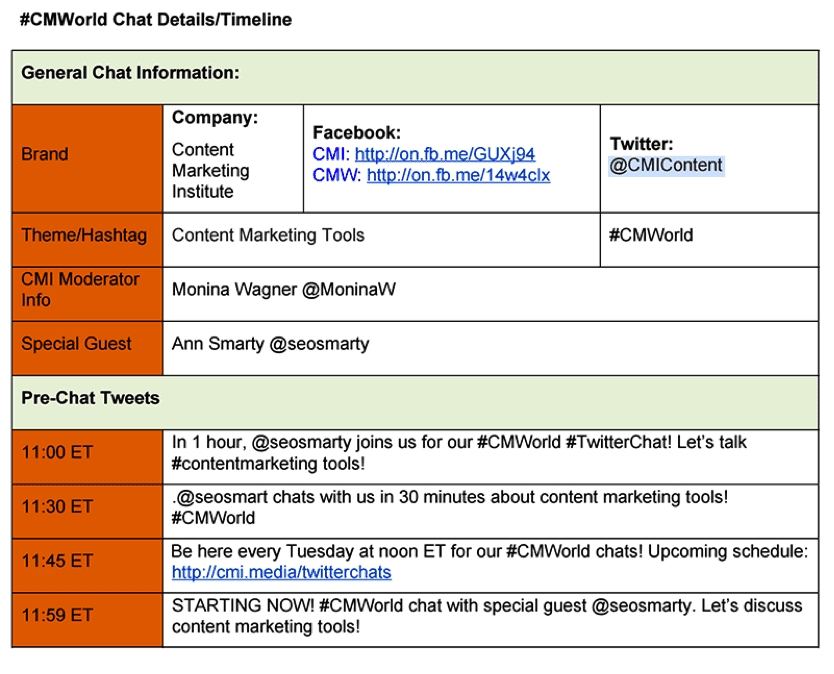 And there are images planned for each part in the timeline:

The more organized this part is, the better. And topic cards for those segments will help keep people on topic and task as you move forward. It also breaks up the chat into more easily viewable areas for those who go through your feed later.

Anyone who has ever had a couple of chatters who have failed to notice (or just failed to cooperate) when the topic has changed will know how useful this can be. Images are harder to ignore.

This is, to me, the most important image to have. It is your thank you, which should be personalized and sent out at different points. Which means creating several different images. I recommend the following:

This last one doesn’t need a transcript link, as they are less likely to share it (they will probably just add it to their favorites). But you should post the transcript link on its own from your profile regardless, with (you guessed it!) an image card.

This is something I have only just started doing, and it applies more to wider re-packaging of content for social media use. But it has been very effective. Take small quotes from your chats and make your own visual quotes from them.

We were randomly doing these for #VCBuzz chats:

Attendees and guests don’t have the control to plan out the visual component of a Twitter chat as thoroughly as the hosts but they can still do some preparations.

The point is, if you tweet a great image right where it fits, you’ll get a ton of retweets and follows, so any Twitter chat will work much better for you!

Here are some quick tips for you:

Do you have any tips for using images in Twitter Chats? Let us know in the comments.

Ann Smarty is the Brand and Community manager at InternetMarketingNinjas as well as the co-founder of ViralContentBee.com. Ann has been into Internet Marketing for 8 years, she is the former Editor-in-Chief of Search Engine Journal and contributor to prominent search and social blogs including Small Biz Trends and Mashable.

How to Tell Relevant Social Media Influencers From Imposters