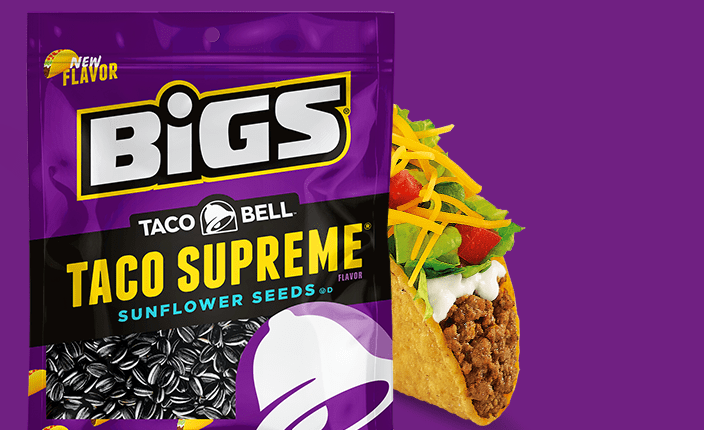 The ad announces the new BIGS Taco Bell Taco Supreme flavor of seeds and serves as a launching pad for a broader integrated marketing campaign. The multidimensional campaign includes social media, digital video, event samplings, and an online giveaway for a free bag of seeds.

BIGS and Taco Bell are pushing this campaign just in time for baseball season and the new flavor is expected to fly into stores later this month.

During the Pyeongchang Olympic Opening Ceremonies back in February, audiences were stunned as 1,218 Intel-powered illuminated drones merged to form various images and the Olympic logo in the night sky. The technology was on point, the creativity involved in the planning stages was enchanting, and the drones themselves had stolen the show.

As consumer interest in drones grows, the use of the product for creative and commercial use has skyrocketed. The dazzling light display presented at the Olympics is an extreme example of drone technology being used to promote a brand (Intel), but drone technology has become accessible enough that more mid-level brands are using the technology in a commercial way.

Whether you’re planning for a massive drone-powered campaign or crafting a lengthy interactive blog post, staying informed will elevate your content in any form.

Future of Drones in Marketing

Drone technology will undoubtedly evolve and change and it’s our job to stay in tune with consumer demand for the products and figure out how to integrate drones into our marketing strategies. Opportunities for drones don’t end with giving them starring roles in ad campaigns. They can be used for filming purposes and for distributive purposes (think using drones to create a moving billboard).

The creative potential for drones is unlimited. As the technology continues to become more accessible, we may see drones take starring roles in day-to-day marketing campaigns.