After Beyoncé’s Red Lobster shout-out, the seafood chain saw a 33% spike in its sales. A celebrity endorsement can do wonders for a brand, but is it worth the effort? Attracting the attention of high-profile celebrities and influencers can be difficult, time-consuming, and ultimately fruitless. However, there is an easier and more effective way to use influencer marketing to boost your brand’s reach.

Researchers at the University of Southern California discovered a social media phenomenon they dubbed the “majority illusion.” Because of the majority illusion, a few highly connected individuals in your network can skew your perceptions of what is and isn’t popular. At Fractl, we’re always excited to use new research to improve results for clients, so we were interested in exploring the majority illusion and how we could use it to streamline our influencer marketing strategies.

How the Majority Illusion Works

It was the night of the Academy Awards again, and you were sure that Jennifer Lawrence was going to bring home an Oscar for Best Actress. After all, everyone had been talking about her performance in “Joy.” Even your uncle had been surprised that “J-Law was able to breathe life into a movie about a mop.”

But your friend insisted, “What do you mean? No one has been talking about Jennifer Lawrence. I didn’t even know she was in anything last year.” Of course, when it came to the actual awards, neither of your opinions mattered. But who was right? Had social media been in an uproar over Jennifer Lawrence’s performance or not? The same way that photos can play tricks on our eyes (#TheDress, anyone?), social media may have been playing tricks on your mind via the majority illusion. 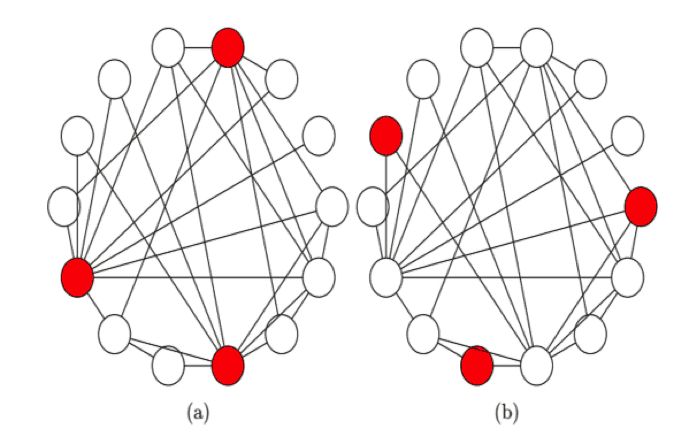 Your social media network is network ‘a’ and your friend’s is ‘b.’ Each red circle is an avid J-Law fan. The two networks are the same size and have the same number of Lawrence fans. However, each person in network ‘a’ would have been more likely to think that Lawrence was the favorite for Best Actress.

Why is this? Pick any white circle in network ‘a,’ and you’ll find that at least 50% of that person’s network is gaga over J-Law. Do the same exercise in network ‘b’. Because the Lawrence fans are less well-connected in network ‘b,’ members of that network are less likely to view her as a Best Actress favorite. Interesting, right? But how can you use this for your brand?

How to Leverage the Majority Illusion for Influencer Marketing

In order to better understand how we could use the majority illusion in our work, we modeled a network graph of 77 Twitter influencers across eight different verticals: automotive, business, entertainment, finance, health, lifestyle, technology, and travel. See more about our methodology here. The resulting network illustrates the hierarchical relationships of first- and second-level influencers within a social network. Click here to see the full interactive graph.

Let’s say that I wanted to promote my brand’s new travel-planning tool, ZoomCheapYay. Instead of going after high-profile influencers (high risk), I would use my knowledge of the majority illusion to streamline my marketing process. Depending on my goals, I could use my understanding of this social media phenomenon in a few ways. Consider these three scenarios:

Creating General Awareness. ZoomCheapYay is a new tool, and my goal at this stage is just to build name recognition. I want to target a suite of well-connected, mid-tier influencers with lots of connections within the travel sector.

Driving Sales. Although ZoomCheapYay will appeal to a lot of people in the travel vertical, it will have the greatest appeal in a few niche communities (bargain travelers, backpackers, etc.). If I focus on niche influencers, I can more easily create a majority illusion in those communities and hopefully drive people to my new tool immediately.

Expanding My Tool’s Reach. ZoomCheapYay’s influencer marketing strategy is doing really well, and I want to expand my tool’s popularity in the personal finance and lifestyle verticals. I can target travel influencers with connections in these two additional verticals.

No matter which strategy or strategies I use, timing is key. If all of my influencers start talking about ZoomCheapYay at the same time, then my campaign has a much higher rate of success.

Don’t know where to start? Tools such as BuzzSumo and Followerwonk are good places to begin looking for appropriate influencers, and our guide to editor and marketing influencer personas can also help you more effectively reach out to influencers.

Although I don’t know a single marketer who would turn down an endorsement from a celebrity, high-profile support isn’t a guarantee for success. Instead of looking for influencers with a large following, it is important to understand your influencers’ network neighborhood. Targeting niche and strategically located individuals is key to an effective and efficient influencer marketing strategy.

Lillian Podlog is a Marketing Associate at Fractl, a content marketing agency that specializes in the science behind viral content. She is also the proud (and protective) mother of two guinea pigs.