Standard content just doesn’t cut it anymore—at least not the bulky paragraphs with occasional pictures that somehow cut it for so long. Readers in today’s digital age are bombarded with information—research even shows that emails get less than 15 seconds, on average, to make an impression.

Unfortunately, 15 seconds for a reader is about the time that it would take just to get through the first paragraph of this article. Now that you’ve seen a visual representation of how little time you have to impress your readers, do you feel moved to action? If the answer is yes, you’ve just seen in a nutshell exactly why infographics work.

There’s a reason why writers, marketers, and brand executives alike have been drawn to mythic works of art like Joseph Campbell’s The Hero with a Thousand Faces for years. Humans have an innate need to mythologize their lives, and they relate more readily to stories that have an emotional impact. Memory and emotion are so closely tied that researchers and educators now recognize emotional response as an integral part of the learning process. In other words, if you want your audience to remember you, you need to move them—and the best way to do this is to tell a story.

So why tell a story with graphics instead of words? A well-designed infographic actually cuts through the noise faster than text. It’s actually fairly difficult to get emotions to resonate in written form, especially since your readers are likely immune to persuasive copy that feels like a sales pitch.

Infographics work especially well to narrate stats, findings, and other data into a digestible format. You can write all the case studies you want, but does it compare to seeing that information artfully displayed in a solid graphic? For instance, check out these graphics from Tripl, a startup community for frequent travelers. These visuals are jarring—you can immediately see what seven percent of travelers look like, for instance, rather than just hearing it repeated.

Numbers and statistics, especially large numbers and percentages, are often meaningless unless you provide some kind of yardstick to give the data context. That’s why you’ll hear distances broken down in terms of football fields, or volumes presented as a number of full swimming pools. A great infographic lets you see the truth for yourself, and there’s nothing more moving than that. 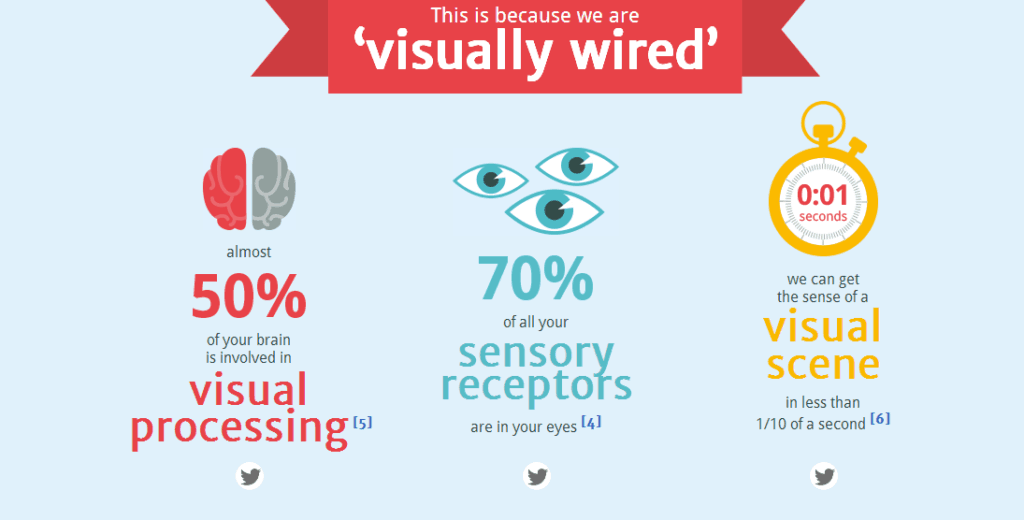 The Long Lifespan of Infographics

Your post about your company’s statistical impact will soon be buried by other content on your user’s feeds, but its accompanying infographics live on. Images have an immediate, strong impact, and they’re easily reshared through social media networks and on image sites like Imgur. If the content in your infographic happens to become particularly relevant—through news or cultural event—then you can easily reshare the content without appearing like you’re out of ideas for new blog posts.

You can even recycle infographic content by chopping the image into smaller pieces or turning it into a narrated video that expounds on the information. It’s not just content—it’s an evergreen asset.

Your average reader may spend 15 minutes on an email, but in all likelihood, they’re giving your social media posts even less time. There are some 41,000 new posts added to Facebook every second—cutting through that level of noise takes a lot more than a snappy sentence or two.

On the other hand, research shows that viewers can process an image in 13 milliseconds, faster by far than it takes to blink. That’s why an impactful infographic stands out. It calls attention to itself in the clutter.

And it’s more likely to be shared. Images and media-heavy posts more readily cross platforms, translating from LinkedIn to Facebook to Instagram to Tumblr to Pinterest and back again. Altogether, that means more eyes on your content—and a wider audience for your company’s words—in less time than it took to finish this piece!

Erin Vaughan is a blogger, gardener and aspiring homeowner. She currently resides in Austin, TX where she writes full time for Modernize, with the goal of empowering homeowners with the expert guidance and educational tools they need to take on big home projects with confidence.