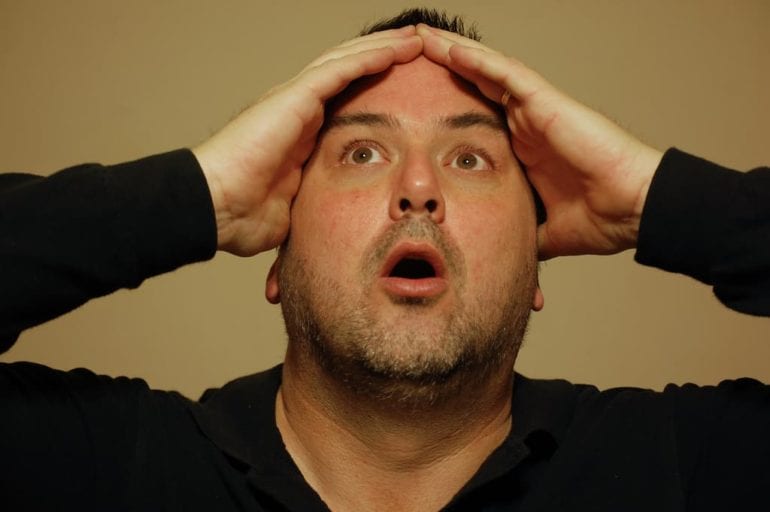 This title is of course reminiscent of the now famous Buffer article recently published entitled “We’ve Lost Nearly Half Our Social Referral Traffic in the Last 12 Months.” You read that right; Buffer lost nearly 50 percent of their social traffic, year-over-year. How could this be? What’s happening out there in social land? The article opines that Mark Schaefer’s content shock concept is likely to blame.

The logic here seems reasonable and the idea behind content shock is simple enough: There are only so many people on the planet connected to the Internet and only so much content they can consume in a 24 hour period. While at the same time, the amount of content produced and published online is increasing at an incredible pace.

Mark points to various studies that show a 500 percent increase in the amount of information on the web from 2015 to 2020 in his latest book, “The Content Code”. This creates an inherent visibility and engagement problem for marketers producing content for web consumption. 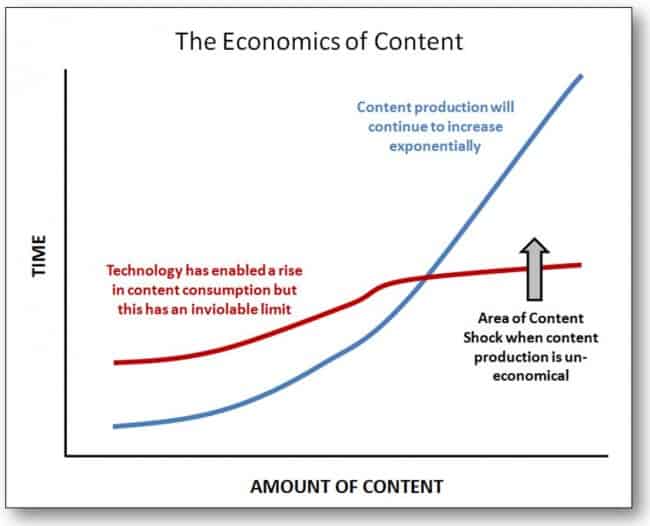 Kevan Lee of Buffer believes that content shock has now infiltrated social media and its being reflected in their analytics. He blames the social networks’ algorithmic feed filters having to ramp up to handle the sheer volume of content being shared. He may be correct. . .

Steve Rayson of BuzzSumo took this idea and did what the folks over there do best: crunching large amounts of social and web data. They were able to figure out, among other things, that 50 percent of content gets eight shares or less.

While parsing the data they also discovered that the average shares per content item published on some of our most popular industry destinations have been on the decline. While the average shares per post have gone down, the number of posts published has increased by 78 percent. In total, this has caused a 60 percent decline in social engagement per article.

The results of this analysis closely mirrored a similar study by Trackmaven. The final conclusion is that the cost-effectiveness of content marketing appears to be on the decline (with cost-effectiveness being equated to social engagement).

This seems to support Buffer’s idea that content shock has infiltrated social media.


WordStream founder and frequent SMT contributor Larry Kim offered up his thoughts on what might be going on with Buffer’s social traffic. He came up with five distinct possibilities:

Add in content shock and the ratcheting down of organic social visibility by the social networks and there’s potentially a lot of reasons why we’ve seen the sudden drop in organic social traffic. There’s also been a massive change in Twitter’s API that has impacted many third-party applications; maybe that has something to do with it, too.

From the moment I read Buffer’s article my gut told me this was mostly an attribution error. Soon after, I read Larry’s article which confirmed my gut lined up with his on that aspect of the issue. It’s been known for quite some time that when websites are accessed within mobile apps, their source is oftentimes rendered unknown and lumped in with direct traffic.

The fact is that over the last few years the migration to the mobile social environment has been massive. This must have had an impact on organic social and direct traffic in the analytics. I don’t have access to the analytics of Buffer, Moz, Copyblogger and Social Media Examiner to test this hypothesis, but I do have access to the Relevance numbers.


While we don’t pretend for one second to hold sway over the massive-sized audiences of these respected blogs, I do believe the Relevance audience is a good sample size.

Looking at year-over-year social traffic shows that we indeed had a drop of 17 percent, confirming what everyone else is discovering. Then we looked at our direct traffic and we were astonished: there was an increase that was within 100 unique visits of the social traffic decrease. In other words, the loss in unique social traffic was nearly identical to the gain of direct traffic.

Does that mean that content shock or some of the other things that Larry mentioned aren’t at play here? No, of course not. Something else could be to blame for the increase in direct traffic, to—or at least a portion of it.

Unfortunately, we’ll never truly know with 100 percent confidence because direct traffic is the black hole of the Internet. Once something gets sucked in and shot out the other side you’ll never know where it came from.

However, armed with this information, I’m not planning on sounding any alarm bells quite yet.

But What About Social Shares Dropping?


Yes, Steve did discover that social shares had dropped year over year for the brands mentioned above. However, he also discovered that the number of posts published had increased 78 percent.

Could it be that there are only so many combined shares an audience can muster regardless of how much content is given to them? For example, I know that I average 14 tweets per day and have so for over five years. If the websites I read increase the amount of content they publish by 78 percent, I’m still only going to tweet 14 times per day.

In order for content shares to rise at the same rate as the number of posts published on a mature site, it would have to have a corresponding growth in audience. Without it, your average shares per post will most certainly decline.

Here’s a recent Blab featuring Mark Schaefer, Steve Rayson and myself discussing some of the above.


There are many potential reasons why the websites mentioned above have seen massive declines in their social traffic. I wouldn’t necessarily chalk it up to just one thing, content shock or otherwise. However, if their analytics look anything like mine, then I’d be taking a good, hard look at incorrect attribution being the biggest culprit.

It’s likely social traffic will continue to decline, but that there will also be an increase in direct traffic as more and more people turn to mobile apps to engage with our content. It’s the reality we live in today.

The best way to combat this problem isn’t creating better or more content. It’s not even changing social campaigns or strategy, necessarily. You see, content isn’t king anymore and it won’t fix this problem. Audience is king, and he who has access and can persuade them, holds the keys to the kingdom.

The solution is audience growth, and that’s accomplished by converging owned, earned and paid media promotion to tap into other audiences at scale. We’ve accomplished this in a number of ways, all of which are outlined in the article, How to Attract Over 50K Subscribers in 6 Months.

In my latest book, “The Content Promotion Manifesto,” I painstakingly peel back the layers of earned, owned and paid content promotion for top-funnel content. Implementing and executing the concepts and strategies outlined in the two above resources are your best chances for growing audience and combating the implications of content shock.