Published On May 15, 2015 Published By Dillon Baker

In case you missed it, the algorithmic apocalypse hit last month. The sun exploded, nuclear bombs rained from the heavens and plagues ravaged the globe. At least, that’s what it feels like in the media/advertising/marketing world.

First, Google rolled out its mobile-first algorithm update, which came with ample warning but left many marketers in a state of panic. But while Google’s change was dubbed with the ominous moniker of “Mobilegeddon,” another much more unexpected algorithm change might prove far more painful for brands and publishers alike.

That’s right: Facebook is changing its News Feed algorithm, and it might be time to freak out, even though the three-fold alteration sounds fairly innocuous on the surface. Here’s what’s in store:

1. If your News Feed doesn’t have much on it (i.e., you don’t have many virtual friends or like many pages), Facebook is now allowing for “multiple posts from the same source in a row.”

2. After receiving feedback from users that they’re concerned about missing important updates from friends they care about, Facebook is giving content posted by those friends greater priority: “Content posted directly by the friends you care about, such as photos, videos, status updates or links, will be higher up in News Feed so you are less likely to miss it,” Facebook wrote. On the other hand, if you use Facebook more to read news and updates from pages, you’ll still see those updates. Basically, after expanding the reach of publisher pages for a while now, they appear to be prioritizing friends again in the feed.

3. You’ll see a lot less of “Suzy liked this post” or “Jimmy made a really weird comment on a post from a page that you couldn’t care less about”-style updates. Instead, you’ll see more updates from friends and pages you follow directly.

Don’t be fooled: These changes could have a big impact on brands and publishers, decreasing organic reach and forcing them to pay to play in more ways than one. Let’s dive in.

What It Means For Brands

Late last year, Facebook delivered a big blow to brands when they limited what little organic reach they had left. Now, they seem to be threatening to limit reach even more.

Loyal followers that interact with your content will continue to be served posts; unfortunately, that group is very small for most brands, and this change may decrease their odds of growing it at all. After all, second-hand referrals through likes or comments will be marginalized, and besides paid posts and advertising, this was pretty much only way users who didn’t already “like” your page could organically discover a brand’s content.

The move pretty much formalizes what we’ve seen coming for a while now: that Facebook is primarily an advertising platform for brands, and they need to think of it as thus. The good news is that it can be a fantastically effective ad platform when used correctly—especially when you consider their recent announcement that they’re going to start tracking conversions that result from ads.

What It Means For Publishers

Unlike brands, publishers have seen huge traffic boosts on Facebook in recent years. In fact, Facebook’s post announcing the algorithm change opens with a prologue pointing out that “referral traffic to media publishers from Facebook has more than doubled in the past 18 months,” and reiterating their commitment to “helping publishers find the right audience for their content”—seemingly to soften the blow of deprioritizing pages in the feed.

As Facebook juiced their algorithm to increase referral traffic to publisher sites over the past few years (see chart below), publishers have become extremely reliant on the social giant. And they have to be worried that this means the party is now over, and they’ll feel the same debilitating squeeze that brands did a year ago. 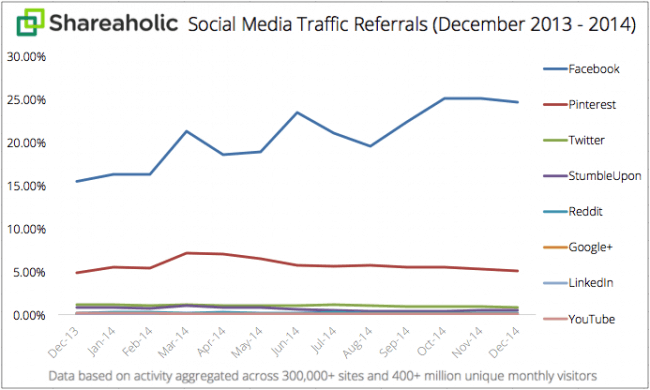 So why might Facebook be doing this, besides their justification of improving user experience? I have some ideas, and I don’t seem to be alone in thinking them.

All Part Of a Master Plan?

The obvious conclusion here is that this is good business for Facebook. When they squeezed brands’ organic reach on the platform, there were plenty of freak-outs, but at the end of the day, brands agreed to pay to reach Facebook’s massive audience. It’s not hard to imagine that similarly-dependent publishers will do the same and pay-to-play.

But there may be another layer to this. If you’ve been following Facebook’s moves closely, then you already know that they set the media world ablaze last month when The New York Times broke the news that they, along with BuzzFeed and National Geographic, have been in talks with Facebook to post articles natively on the social media platform.

Overall, it’s hard not to see the algorithm change as a way for Facebook to push publishers towards making a Faustian bargain—posting natively on Facebook and splitting the ad revenue with the social giant, since those stories will ostensibly be prioritized in the Feed.

Only time will tell if Facebook’s algorithm change truly brings the apocalypse for social-dependent publishers or just a bit of acid rain. But if it does come, publishers will have a tough choice as Zuckerberg reaches down from his idyllic spaceship, extending a hand to whisk them away.

Looking for Ways of Boosting Your YouTube Subscribers? Try These Time – Tested Tips