Yet folks like the Golden State Warriors drive 8 million impressions and 2 million clicks on a simple 15-second amateur video with no ads. And a political blog can get higher PTAT (when it still existed as a measure of engagement) than Coca-Cola.

You’d think that the more popular a post, the greater the engagement rate, right?

The old wives’ tale says that if your engagement rate is high, then you get a multiplying effect. And at some point, because you’ve gamed the algorithm, you’ve broken out and “gone viral”. Our research suggests that you shouldn’t take that notion to the bank just yet. Let’s try to debunk a few popular myths around reach.

First off, you may be asking yourself, “what exactly does reach mean on Facebook?” and you’re not alone. When people typically refer to reach, what they’re often talking about is organic reach which is the total number of people who have seen your Facebook post without you having to pay for it. So when you post content to Facebook and your friends/fans see that content, and it doesn’t cost you a dime, they’re counted in your organic reach metric.

You also have paid reach which is the total number of people who saw your Facebook post as a result of you running a paid ad or “boosting” your post.

Lastly, you have total reach which is the total number of people on Facebook that saw your content through either organic and/or paid reach. Total Reach = Organic Reach + Paid Reach

It’s worth noting that an individual can be included in both your paid and organic reach numbers, since they may see your content through an ad (paid) and when one of their friend’s share your content (organic).

For more information on how to boost your organic reach on Facebook, check out this related post titled “Studies Suggest Videos Double Organic Reach On Facebook”.

If you’ve got a moderately sized presence, your posts analytics probably look something like this: 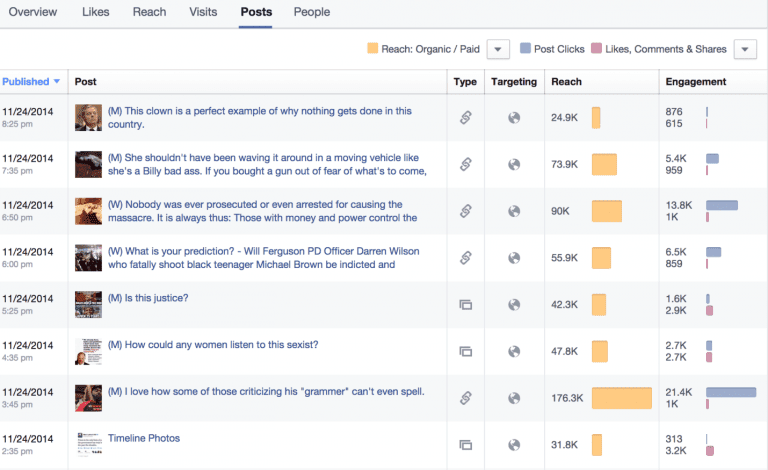 Notice that the posts with the highest reach also generally have the most interactions. But now let’s calculate the gross engagement:

And if you keep going, you find that the posts with really high reach have a progressively lower engagement rate.

How can this be?

The short answer is this: Within the first five minutes of making a post, Facebook allocates some initial reach. If this audience has high engagement, then you progressively get more reach. And like a pebble creating rippling waves in a pond, the area of the expanding circles grows.

By the time the post has exhausted its potential, you’re reaching far beyond your normal core audience. So, your engagement rate at that point is much lower than when it started.

Because averages lie, your “lower” engagement is a weighted average of the high engagement of core fans and the low engagement of the much larger audience of casual fans.

Here is daily newsfeed coverage vs. percentage of folks who are sharing (the applause ratio). You might post multiple times in one day – each of which can reach a separate or overlapping audience – but overall, the total daily unique reach has a surprising connection with total daily interactions. You might even think that Facebook is promoting unpopular or un-engaging content.

If you’re a hardcore data geek like me, you might be interested in investigating further by downloading the CSV insights file on posts. (You can’t get organic vs. viral reach in the regular web user interface since they are now combined together as “organic”.) 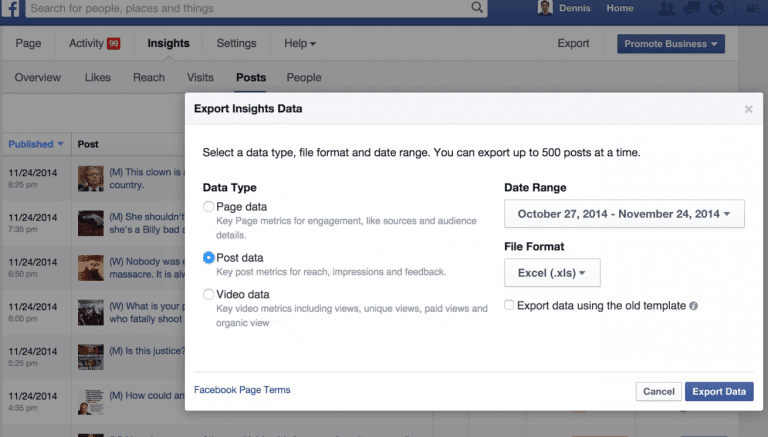 Now you can do the math to your heart’s content on impressions, reach, engaged users, negative feedback, and so forth. Facebook doesn’t make it easy, but with a little Excel magic, you’ll likely be able to determine the following insights:

(Note: A lot of people get lost here. Just understand that unlike web analytics where people come back once in a while, in social, you have a lot of people viewing your content in short time periods. So if you’re not looking at one-, seven- and 28 day reach trends, you won’t know which audiences are getting too much exposure to your content versus not enough.)

Reach varies by demographics, too. Don’t like to crunch numbers in Excel? Let’s look at some charts.

Odds are your distributions will be similar to these, which are averages across a few entertainment brands. Most of your users will have a frequency of one, which means they get one impression per day or week. 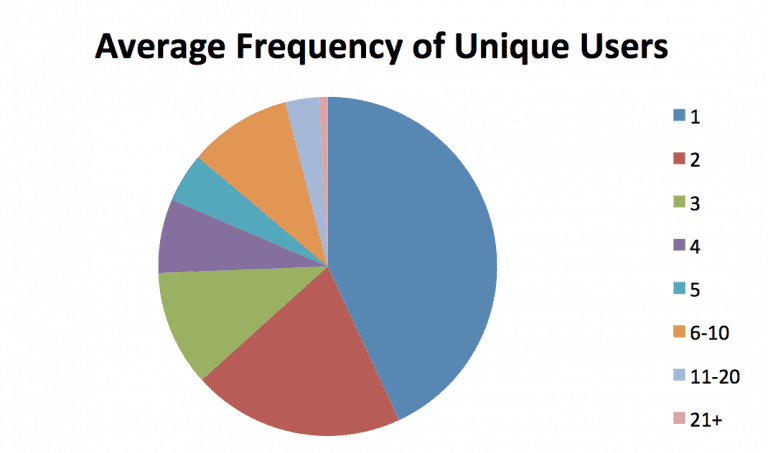 But don’t ignore those 11-20 and 20+ folks.While they might be only a couple percent of your base, they may be 20-30 percent of your impressions/engagement.They’re more likely to be avid fans who also visit your site, use your apps, are on your email list, and so forth. Identify and segment them.

For certain brands, you may have a significant gender skew, but make sure to look at whether one gender significantly engages more: 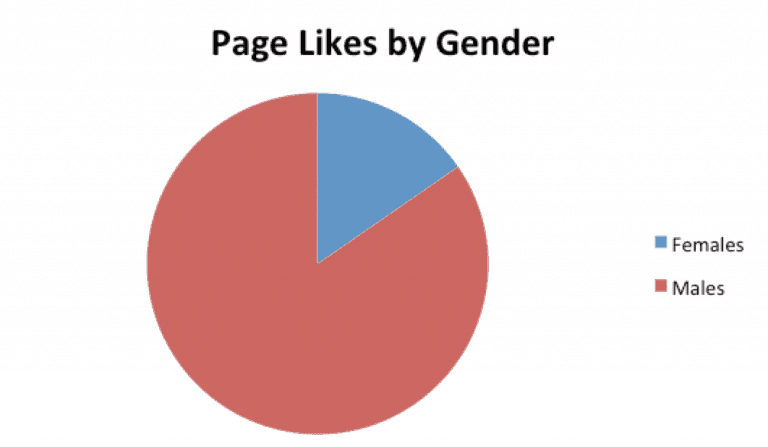 The same is true by age: Perhaps you have a lot of younger fans, but older demographics engage and buy more.

Impressions are an early indicator of engagement, while post frequency, seasonality and the impact of other marketing efforts drive impressions:

Don’t equate impressions or engagement with conversions. These are three stages in the funnel (audience, engagement, and conversion). Identify which customer segments play a role in each part.

Facebook provides rich insights data on how your page and posts are doing. And this has led people who are well-versed in Omniture or Google Analytics to make fundamental errors in analyzing social:

Dennis Yu is Co-Founder and Chief Technology Officer of BlitzMetrics. He is an internationally recognized lecturer in Facebook marketing, having been featured in The Wall Street Journal, New York Times, LA Times, National Public Radio, TechCrunch, Fox News, and CBS Evening News. He is also an author at InsideFacebook and AllFacebook. Dennis has held leadership positions at Yahoo! and American Airlines. He studied Finance and Economics from Southern Methodist University and London School of Economics. Besides being a Facebook data and ad geek, you can find him eating chicken wings or playing Ultimate Frisbee in a city near you.