We hear a lot about the “on-demand economy,” “sharing economy” and the “collaborative economy” – how companies like Uber and AirBnB are disrupting their industries by eliminating the middleman and matching up buyers and sellers. The result is an empowered consumer, one who feels far more a part of the transaction than they did when they were dealing with a faceless corporation.

And guess what? Something remarkably similar has been happening in the world of television: we call it the #CreatedWith Economy. There were numerous examples of it on display during the Super Bowl this year and we’ll be hearing more and more about this as we creep further into 2015.

A prime example is SnapChat’s recently announced “SnapperHero,” which will star a handful of top online video celebrities from YouTube, Vine, Instagram and Snapchat, such as Freddie Wong, Harley Morenstein and Anna Akana. These stars will play superheroes acting out plot lines that their fans will help write.

This is authentic, collaborative and – above all – personal storytelling that provides access and outcome. The audience is part of the experience, rather than just a passive observer. It is that sense of involvement and ownership of the programming that allows for the growth of more invested fans – fans who can be relied on to be both a loyal audience and evangelists for a show. The audience can now share their experience and claim that they were a part of creating this story world with these stars.

The advertising and branded content portions of this project are critical too. At a time when the $160 billion spend on live TV advertising is under attack, the industry is desperately looking for an alternative. #CreatedWith content may well be that alternative (or at least a significant part of it).

The traditional definition of “celebrity” has morphed into the users that are generating the content; these are our modern-day celebrities. They’re not just YouTube stars or Vine stars; these are the next generation of celebrity!

As another example, Tumblr recently announced the creation of a program that will work almost like a talent agency, pairing popular Tumblr blog creators with brands. The program, named The Creatrs Network, would lend an authentic voice to the brands’ own Tumblr presence and allow fans of the creator to feel like they have some sense of partnership with the brand as well. It’s a clever way to take advantage of all of the “stars” who were found on new platforms like Tumblr, Instagram, Snapchat and Vine – amateur creators who have garnered a sizable audience the same way their predecessors on YouTube and Twitter did.

In addition to modern born companies like Snapchat and Tumblr, now even older media companies are jumping into branded content. Mass media company Conde Nast made a recent announcement of plans to launch a studio called 23 Stories. The studio will work to create branded content pieces through an in house editorial and design team to better organically blend in with the editorial. 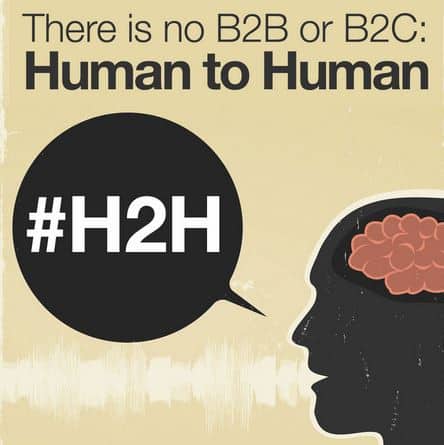 This concept goes beyond the B2C or B2B paradigm to break down the fundamental aspects of communicating and appealing to somebody on the “human-to-human” level. #CreatedWith content works the same way. Social media has given fans the platform and ability to reach out to the people writing and creating programming, and vice versa.

By reaching out to that engaged audience and working together, content creators now have the ability to extend their storylines, create promotions and dream up new experiences that harness the immediate feedback loop that a human-to-human infrastructure affords. It doesn’t mean that the creators give up control over the narrative; it just means that they bring in fans as collaborators – giving them a voice, and possibly a role to play as well.

So, let’s breakdown a few of the elements of why #CreatedWith is so powerful:

What’s In It For Brands?

Brands who use the #CreatedWith philosophy to work collaboratively with the people creating their content gain a myriad of benefits. They are able to speak directly with the creator’s audience in a voice that feels real and authentic. That’s true whether the creator is a Conde Nast reporter crafting branded content, a showrunner and their writing staff creating a branded promotion around a show or a fan who is participating in said content promotion.

In all of these instances, the brand gains authenticity and a sense of intimacy: they are no longer a faceless behemoth. This is an excellent tactic for getting through to the coveted Millennial demographic and for empowering the staunchest fans in a way that avoids the pitfalls of interruptive advertising.

What’s In It For Social Platforms?

Do you think it was a given from the start that Snapchat was a legitimate storytelling platform? It wasn’t until gifted digital content creators figured out how to creatively use it that it really gained traction, and thus the attention of advertisers. As a result, Snapchat is shifting from a selfie platform to story-world platform.

Social platforms gain a level of sophistication when they allow their stars to become paid content creators. It also gives the platform credibility when big brands or TV shows come calling for their users. #CreatedWith content gives platforms more and varied revenue opportunities while simultaneously encouraging users to spend more time with the platform and increase their loyalty.

The final benefit is that it establishes them as a viable advertising platform — not for interruptive advertising, but for native advertising that feels authentic and allows users to engage with it on their own terms.

What’s In It For Creators?

Stars who create content for brands get to establish their credibility as artists who are fluent in a particular medium. They also get to work with bigger budgets, as production costs are no longer self-funded. Working with co-creators on their projects provides them with a chance to spread their creative wings and experiment with ideas they may not have thought of on their own. It also allows them to make money doing something that they love, which many of them had never really thought possible.

#CreatedWith content provides new opportunities for the stars of social media, giving them a heretofore unexplored revenue stream that they can use to up the production value or volume of their output.

What’s in it for the Audience?

Audience will be the real beneficiaries of the #CreatedWith system, as they will have access to experiences that feel authentic, fresh and inclusive – three words rarely associated with the old regime. In a world where we are bombarded with advertising absolutely everywhere, all the time (more than ever before), #CreatedWith enables the audience to feel like they are part of the story-telling, a part of what gets thrown at us on all of our screens all the time. It elevates that type of branded content and advertising above all of the other noise.

Changing The Way We Look At Creation

The #CreatedWith philosophy is going to change the face of the entire media industry – the television and advertising industries in particular. It has already allowed traditional television content to reach fan bases and engage them in ways that were never before possible, giving audiences decision making power and the ability to influence outcomes.

More than that, it has established a one-on-one dialog between content creators and their fans. #CreatedWith allows content creators to harness the power of various social media platforms to increase audience engagement and acquisition. This involvement in content development empowers fans to be evangelists – the embodiment of the #H2H concept.

This article originally appeared on Medium and was co-authored by Jesse Redniss and Alan Wolk.

Jesse is an Emmy-nominated and Shorty Award-winning storyteller who has become a leading voice in defining and reinventing the future of TV. From his use of innovative technologies to his ability to meld marketing and show running for a winning recipe, Jesse has been on the front-lines from all angles. He is the visionary who turned USA Network into the no. 1 cable network in digital entertainment and introduced gamification to the world of network branding. In addition to spending more than eight years as SVP of Digital at USA Network spearheading the networks digital, social TV, and second screen initiatives, he also managed technology innovations, monetization strategies and content development for the brand with leading breakthrough successes like Psych’s Hashtag Killer and more recently USA’s industry-defining screen unification. Just prior to co-founding BRaVe Ventures, he was also the Chief Strategy Officer leading media relationships at Spredfast. Among his accolades, Jesse is an Emmy nominee, was named a Multichannel News ‘40 under 40’ to watch in the digital world, as well as the recipient of TV of Tomorrow’s 2013 Individual Leadership award and 2012 and 2013 Social TV Marketer of the Year. He currently serves on the Board of Directors for PromaxBDA as well as sits on the Vision Council for the Television Academy IMPG (EMMY) An avid writer, Jesse’s work can often be found in Television and Entertainment focused media publications such as AdAge, AdWeek and LostRemote.