In 2011 advertising revenue in newspapers fell to less than $25 billion – that is half of newspaper revenue from 2003. But that’s only part of the story. In 2009 the Pew’s Center for Excellence in Journalism discovered 65 percent of Americans are abandoning traditional news outlets because they no longer serve their needs. It’s worse than you think. When polled about the financial crisis of the news industry, 36 percent of people surveyed were not aware of the industry’s financial woes and 24 percent knew very little. What does that mean for traditional earned media coverage? As advertising revenues shrink, so does staff and space to publish news.

Research Paints A Picture of Opportunity for Brands

According to Pew researchers, “Perhaps more ominous for news outlets, those who are more aware of the financial problems and those who see a connection to reporting are the people most likely to have abandoned an outlet because it no longer provided them with the news and information they relied on.” 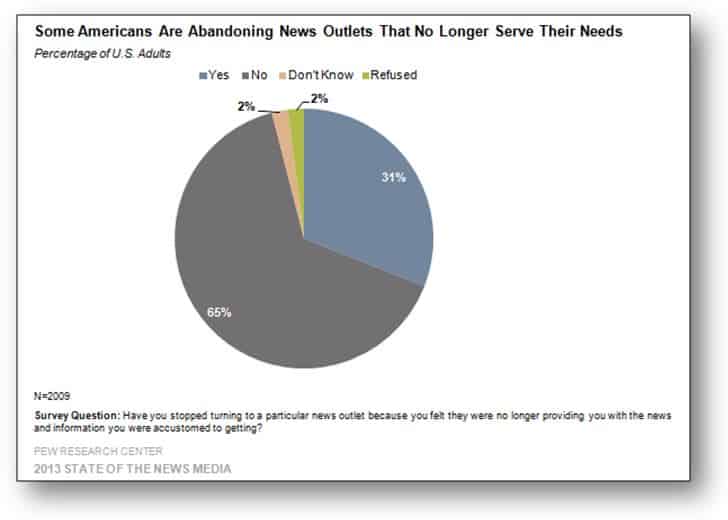 The picture is clear – fewer reporters mean fewer resources for news organizations. But this opens a tremendous opportunity for brands through honest journalism and content promotion.

Larry Kim of Wordstream used an earned media and content promotion strategy to strengthen his company’s brand online. His company created a head-to-head analysis comparing advertising on Facebook vs. the Google display network and released it days before Facebook announced its IPO. Kim’s team produced real news around a public announcement sure to garner media attention.

The piece was relevant and ripe for journalists because of its angle. Instead of the IPO announcement, which every news organization would be reporting on, Kim’s team gave media an angle to develop stories about online advertising platforms. The hook was apropos because Google and Facebook rely on advertising platforms for revenue, and the success of an IPO is related to the health of profit-making streams of an organization. In his post he wrote, “The key to content promotion is having a strong hook. Since there are many different types of publications out there, it’s important that you have different hooks that appeal to their various interests.”

This hook helped journalists stand out from their contemporaries. Can you imagine the conversations Kim started in newsrooms across America? Brilliant.

Aside from getting the attention of journalist, earned media- supported by a robust content promotion and social media strategy- is the secret sauce. In fact, according to Ink House Design, 92 percent of marketers say social media campaigns have increased web traffic, and 78 percent say it generates more quality leads.

Success with earned media doesn’t come without planning. Traditional media relations planning was relatively straightforward. Find media outlets and influential journalists, create the information for them to use as story fodder then pitch them at the right time. But today’s media environment is more complex. Companies must think about social media channels, such as Twitter, Facebook, and Google. Additionally, it’s important to think about paid promotion, as well as identifying non-journalistic influencers.

Connecting the Dots for Companies

Earned media has never been easy to acquire, that’s why it’s earned. However, once journalists and other influencers pick up your story, to be successful in today’s marketplace, the information must be newsworthy. It must provide journalists with a different hook, a new angle, a fresh perspective. You can’t neglect social. You shouldn’t ignore bloggers. And, your news should be available to share in print, on air, in a tweet, from a Facebook share, and email. Finally, use paid social promotion channels to break through the noise.