Like many others, my Mom used to challenge me as a kid by asking the now-famed rhetoricals: “Do you believe everything that you read?” or my favorite, “If all your friends jumped off a bridge, would you also jump?”

Obviously, these age-old questions were designed to challenge any dangerously blind modeling to peer pressure I may have been developing, and more importantly to teach me how to think and act for myself – based on my own values, analysis, and logical thought processes.  It seems this pattern of common sense thought can also successfully be applied to general business decision making, and more specifically to how we make decisions at our interactive agency when it comes to search engine optimization rules.  Thanks Mom!

As a result, our agency’s SEO best practices have developed to model those websites that are actually performing at peak levels, and not to simply adhere to what the SEO community and Google executives claim the best practices should be. Sure, most of the best practices we review, we find to be valid, but Interact Marketing regularly applies additional due diligence and analysis to challenge a few doozies, such as META Keywords, HTTPS, and about two dozen other commonly accepted best practice variables. We are confident that the resulting decisions we make using this real data are not just coincidental, but utilized by the world’s top-ranking websites as well as our respected clients to garner that extra edge over the competition.

In short, we’re not jumping off certain bridges just yet.

In 2017, search engine optimization professionals have endless tools at their disposal for everything from keyword research, to link-back assessments, and automated HTML markup validation. But, sometimes we forget about the most basic tool of human input–common sense.

Yes, tools are imperative for success in any digital marketing strategy, but the bulk of our success often comes from decisions that go against common knowledge, and rely more on common sense. To be truly effective, you can’t always qualify your SEO decisions on what others are saying within the digital marketing industry–even sometimes what leaders at Google and Bing are saying.

Instead, true innovation often comes from challenging the established norm, and this how we make key SEO decisions at Interact, once our team members sense something isn’t quite adding up to logic with so-called “industry best practices”.

We do not just believe what we read.

To validate these common sense instincts, the team is always performing isolation testing, and measuring the global adoption rates of dozens of SEO variables based on what is actually working or in-use on the top-ranking websites on the web. This is, in fact, a much more logical approach than just basing an entire strategy on what the SEO community is touting.

Two of our example studies are outlined below, the first being our study on the use of META Keywords–something even Google has claimed useless as early as 2009–and the second being the site-wide use of HTTPS (secure certificates), which is standard security technology for establishing an encrypted link between the browser and web server, that Google first announced could actually boost ranking signal in 2014.

META Keywords Common Sense: The Top-Ranking Websites Still Use Them

For almost a decade, Google and Yahoo/Bing reps at popular search marketing conferences have touted “don’t use META keywords” –keywords infused in the HTML META code initially intended to direct search engines–saying they have no ranking factors whatsoever.

The reps also warn that though META keywords certainly can’t help, they can actually harm rankings if used wrong—such as using too many keyword phrases, too lengthy a list of phrases, or obvious keyword “stuffing”.  Because these tactics were once heavily abused, the strong recommendation in the SEO community was to completely abandon their use.

This news went viral, and of course all the SEO community immediately framed this as best practice, though most content management systems still support the feature in their SEO tools to this day, and the W3C (international consortium that manages html standards) have not deprecated or suspended use of the tags in the official HTML markup language. So, why would we argue with an ultimate source like Google?  Answering that question led us to do something so simple, that many fail to do it – actually analyze the usage of the META keyword tag on top ranking sites.

In fact, we’ve checked over 150 websites annually, and the top-ranking sites on the web are mostly all still using the META keywords tag. So, what gives? 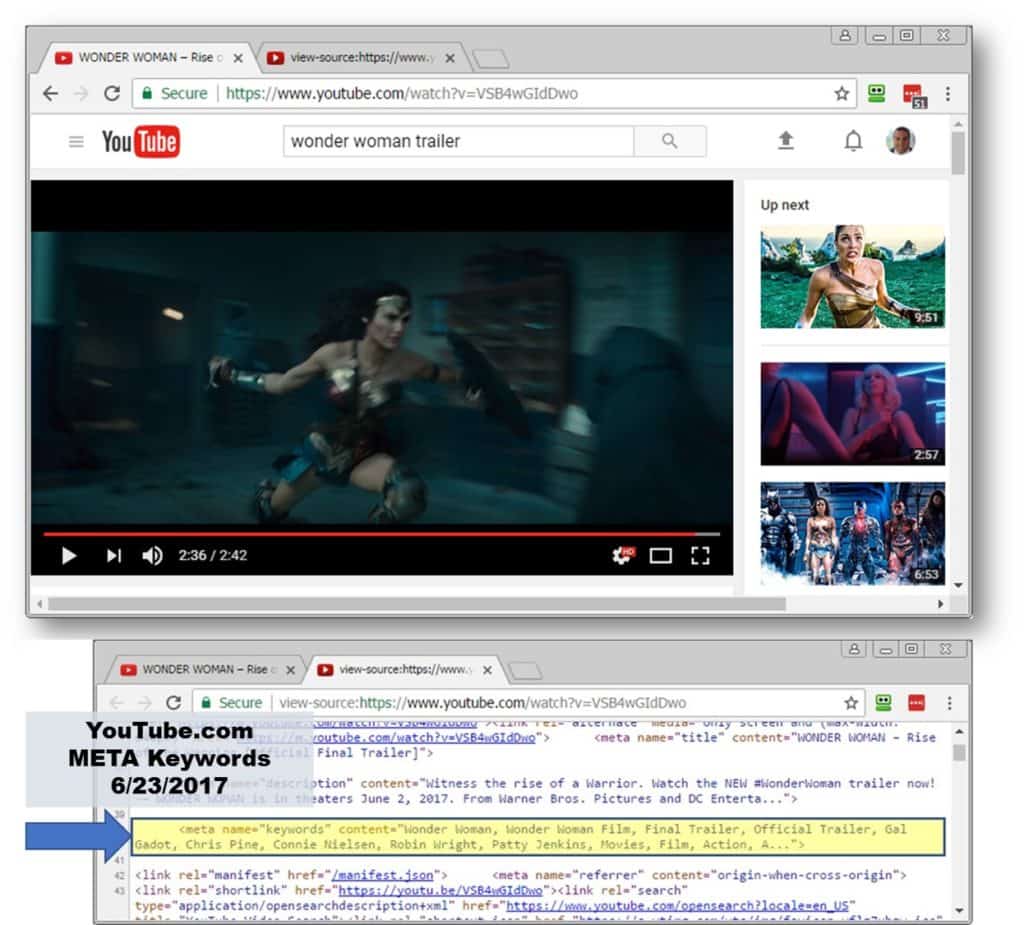 If it can’t hurt, and you’re abiding by white hat SEO rules such as not keyword stuffing and keeping lengths to a minimum, then can it hurt to use META keywords? What is your logical, third-grade opinion given this data?

At Interact Marketing, we continue to recommend the use of META keywords for all of our clients, most which rank for dozens of phrases on page one of search results within their respective industries. That doesn’t seem to hurt, now does it?

Many competitors have even taken notice, and some have even tried rogue spamming to snipe Interact Marketing clients, claiming we are using outdated SEO tactics because so-called “established authorities” say the tags are useless. Nothing can garner client confidence more than justifying our decisions by attributing our reasoning not to just what the SEO community thinks as a whole, but what some of the top-ranking–and most profitable–businesses out there are actually doing – especially Google-owned properties.

We’ll certainly be open to re-consideration when we are challenged to “do as they do”, rather than blindly just “do as they say”.

HTTPS Common Sense: Most Top-Ranking Sites are Now Using It

The second study we conducted was measuring the global use of HTTPS, or an SSL certificate, which Google has strongly suggested since 2014, saying its preferred and may actually help search rankings. Interact Marketing also recently completed some analysis on this variable, and almost all the top-ranking sites, including many Fortune 10 sites, are now actually exclusively serving page content using HTTPS.

In fact, these sites are using HTTPS not just on their checkout or login pages, but across the entire site, something that’s strongly recommended by Google. Again, it comes down to common sense; if the top-ranking websites are using it, why shouldn’t everyone? But Interact Marketing has dozens of clients that worked with former SEOs who didn’t stress the use of HTTPS, especially on sites that don’t make actual purchasing transactions.

As of 2017 Interact Marketing is making site-wide use of HTTPS a “strong recommendation” for all clients – and not just for SEO purposes either.

Why? The answer is three-fold. First, SSL certificates provide serious defense against hacks, protecting your stored data from cyper-criminals. Even if it’s only an email database, hackers can do much damage. The second and third reasons are more for your business—SSL certification will enhance your brand credibility, and customers will trust your business. Just the psychological aspect of seeing that green secure lock before the URL can do much for credibility and trust. These reasons alone can help not only boost your site’s credibility and business trust, and may be the first vital step–even if subconscious–towards conversion. SEO value is an added bonus.

So, when the tendency of your colleagues is to blindly believe what they read, and all your “friends” are diving off bridges, try to take just a moment and remember the ageless wisdom of mothers everywhere.  Don’t be afraid to take a closer look, think things through, and decide for yourself what makes sense.  You may be surprised how this new paradigm of thought can effortlessly allow you to make wiser decisions that are grounded in factual analysis, questioned authority, and of course… common sense.