The IAB has 6 Categories of Native Advertising. For Marketers, they are Confusing.

For several years now, the Interactive Advertising Bureau (IAB) has done their best to categorize online native advertising to make it easier for marketers, advertisers, media buyers, publishers and the government to understand it better. Unfortunately, it’s hasn’t helped much and in many cases, has created even more confusion. Today, it’s time to propose a new categorization model. One that’s simple to understand and easy to communicate.

Let’s start out by looking at what the IAB is and what it does. Not every marketer is familiar with it. Whether marketers know it or not, it’s shaped many aspects of the work they do and has so for over 20 years.

What is the IAB?

In order to spare the readers of this article from having to trudge through all the copy on the IAB the important stuff is bolded.

The Interactive Advertising Bureau (IAB) is an advertising business organization that develops industry standards, conducts research, and provides legal support for the online advertising industry. The organization represents a large number of the most prominent media outlets globally, but mostly in the United States and in Europe.

The Interactive Advertising Bureau (IAB) empowers the media and marketing industries to thrive in the digital economy. Its membership is comprised of more than 650 leading media and technology companies that are responsible for selling, delivering, and optimizing digital advertising or marketing campaigns. The trade group fields critical research on interactive advertising, while also educating brands, agencies, and the wider business community on the importance of digital marketing. In affiliation with the IAB Tech Lab, it develops technical standards and best practices. IAB and the IAB Education Foundation are committed to professional development and elevating the knowledge, skills, expertise, and diversity of the workforce across the industry. Through the work of its public policy office in Washington, D.C., IAB advocates for its members and promotes the value of the interactive advertising industry to legislators and policymakers. There are 43 IABs licensed to operate in nations around the world and one regional IAB, in Europe. Founded in 1996, the IAB is headquartered in New York City and has a San Francisco office.

So, to simplify the above, the IAB is a lobbying and think tank organization looking to bring method to the madness of online advertising in order to prevent stifling regulations on marketers, publishers and technology companies like Google and Facebook. In fact, it’s stated goal is self-regulation of the industry. Here’s what they say about self-regulation:

It’s stated goals for its Public Policy Office are as follows:

Now that that’s out of the way let’s examine the IAB’s six categories of native advertising and the likely impetus for them. The below was pulled directly from the IAB’s, The Native Advertising Playbook.

Let’s Break Down the Categories

Some of the above categories are pretty straight forward and make perfectly good sense to marketers – take paid search units for example. The vast majority of marketers get that. Now let’s look at recommendation widgets and in-feed units.

If a marketer is familiar with the many content discovery networks out there than the recommendation widget category makes sense. However, there’s still a large group of marketers still unfamiliar with this category and won’t get it.

In-feed units as a category is problematic, too. While I understand it, the vast majority of marketers don’t. This category can include a full-on long-form article written for a brand and published in the Wall Street Journal, to a paid in-feed Facebook advertisement. Are the two really that similar?

Promoted listings, as a category, is fairly strait forward. It basically includes lower-funnel native ad units for e-tail and ecommerce companies. The fifth category is very problematic. There’s been a push by some technology companies to take existing display, display-like or interstitial advertising and design it to look like a native ad. However, the unit is still display. Meaning, it’s not even native advertising, whether it’s disguised so or not.

The final category, custom / “can’t be contained” appears to be a catch-all category to place native advertising that doesn’t fit in the above. It’s doubtful any marketers can name four or more examples from this category without the help of the image above.

Why this doesn’t Make Sense

Over the last 11 months I’ve been painstakingly mapping the entire native ad tech landscape. When I completed the 2017 landscape in February it consisted of 272 companies (see lumascape below). However, throughout the year that number has ballooned to over 360 companies. The native ad tech companies can be categorized by all sorts of different things – channel, format, type, buyers journey position and more.

The final “custom” category pays no mind to channel, format, type or the buyers journey. This is problematic, because none of the categories seem to have much logic behind them when compared to the others. This leads to confusion for most marketers trying to understand native advertising. 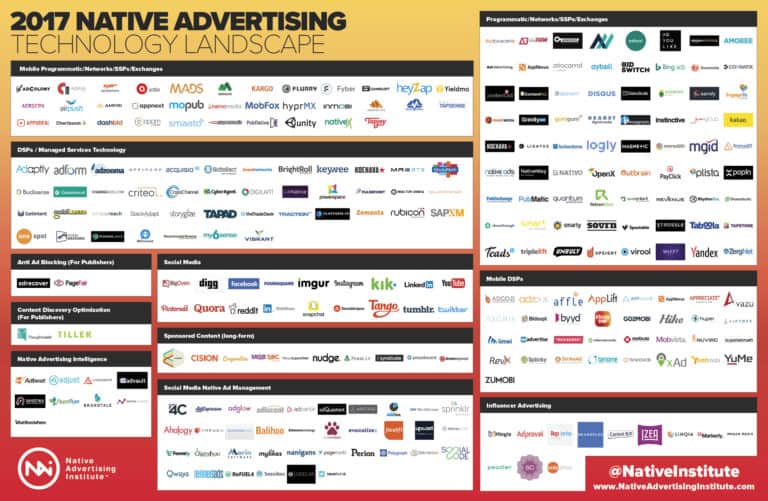 Why this seemingly random array of categories? Who are the winners?

This is a good question and I’m merely speculating the answer. With over 360 native ad tech companies, these categories create certain winners and losers. The search engines certainly are winners, having their own category.

Publishers and social media have their own category, making them winners, too. In addition, both content discovery and display (disguised as native) are winners. Lastly, native solution that cater to e-tail and ecommerce come out on top.

The order of the categories matters, too. While I don’t have access to the IAB’s membership list or its financials, it’s a good guess that the majority of membership money they receive is from publishers and social media companies. Next is likely search engines, with content discovery platforms, fake native advertising and Amazon bringing up the rear.

Who are the losers?

This is just speculation, but if I had to bet, I’d say the losers are the ones that give little or nothing to the IAB. Thus, they are all just lumped into the meaningless “custom” category at the end of the list. Some of these losers would include native ad tech in the following areas:

In an effort to remove any appearance of kowtowing to certain special interests and making native advertising much easier to understand for marketers, the IAB should adopt a much simpler standard. All native advertising falls into one of four categories.

These are the proposed four categories:

1. Long-form native advertising – when publishers create and distribute sponsored content (articles) on their sites the finished product should fall in this category. There is so much confusion globally about how an entire article can be called native advertising the same as a programmatic unit. This eliminates the confusion.

2. Programmatic native advertising – as long as the unit matches the form, feel and function of the media which surrounds it and is powered by algorithms, machine learning, natural language processing, and/or artificial intelligence it belongs in this category.

4. In-feed social media – this is pretty simple for a marketer to wrap their head around. Yes, social is programmatic, too, but by virtue of it being social media it should have its own category. This eliminates the confusion around trying to understand how a sponsored article or recommended content unit falls under the same native advertising umbrella as social media.

The below deck from Native Advertising Days 2017 in Berlin highlights these recommended four categories and the content types that can reside within them.

This article was not to demean the IAB in anyway. They do a lot of great work and make our lives easier in so many ways that most of us aren’t even aware of. That said, I’ve traveled from Silicon Valley to Moscow and the confusion surrounding native advertising is real.

I believe that the current categorization model has added substantially to this confusion. Even though native advertising budgets are projected to grow substantially in the near term, I’d argue that they’d be growing even faster if the above recommendations were enacted. Even if they aren’t, marketers can use them themselves to better understand native advertising moving forward.

5 Content Marketing Trends You Need to Watch Out in 2018