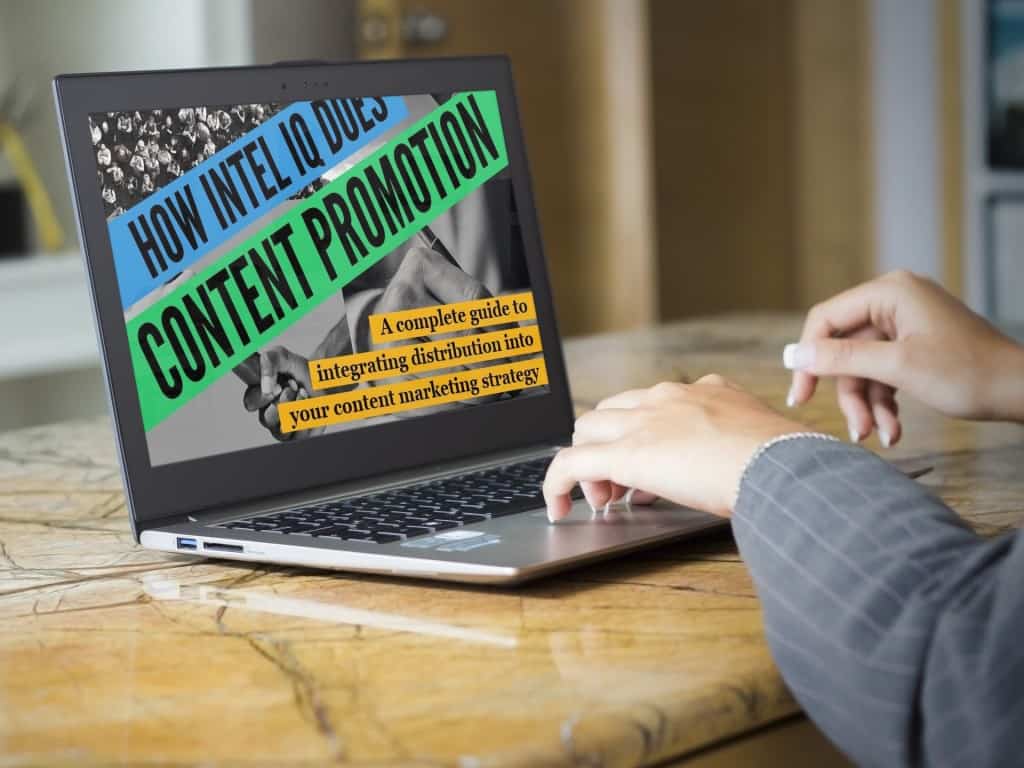 Content marketers and others who want to gain attention on the web have a problem: The Internet keeps growing, and more than half of users spend less than 15 seconds per webpage. How in the world is an individual or company expected to gain an audience’s attention and keep it?

Luke Kintigh posits in his latest e-book, “How Intel iQ Does Content Promotion,” that the solution lies in this truth: The distribution of content is at least as important as the quality of the product itself.

Kintigh is a global media and content strategist for Intel and was the managing editor of iQ by Intel, which now receives more than two million unique monthly visitors. His book, which was originally a series of blog posts, was recently published by Relevance.

In Kintigh’s words, “In the early days of iQ, we were like a chef who spent all day cooking an incredible meal – only to find an empty table come dinner time.”

Okay, so maybe Kintigh is better at content distribution than he is at coming up with fresh metaphors. “Let’s marinate your content with some distribution goodness” was another gem that caught my eye, but we’ll give him a pass on literary prowess.

To be clear, Kintigh isn’t suggesting that the quality of written content doesn’t matter, and in fact he suggests going out and finding successful writers who know what they’re doing rather than letting in-house employees try to figure it out. Visuals, headlines, optimization for mobile devices and analysis of assets for targeting are especially important to consider when you do create your own content.

The “sweet spot,” Kintigh suggests, is at the place where quality content and built-in distribution meet. He goes so far as to outline how his team evaluates and grades writers for their ability to distribute content and suggests bonus pay for writers whose content receives above-and-beyond attention. According to Kintigh, trial periods for writers are appropriate.

All content shouldn’t be distributed equally. Kintigh points to the 90/10 rule: ten percent of the content drives 90 percent of the traffic. Which posts will succeed must be discovered early. As Kintigh writes, “The sooner you take action, the greater the velocity and efficiency you’ll see from your media. Weekly and even daily performance reports won’t enable this ability—you need real-time capabilities and reporting.”

Using another metaphor, Kintigh refers to this new approach as a “Moneyball” method rather than the outdated “Field of Dreams” tactic: Build it and they will come.

Kintigh also pushes for creative reactivating of content that performs well. As an example, he shows how iQ initially released an article about how Peyton Manning uses tablets, but the article didn’t perform that well until iQ added a graphic and re-released the article right before the Super Bowl that Manning was playing in. Timing matters.

Just because something of yours got some attention or even “went viral,” doesn’t mean you’ve won over an audience. You have to get them to keep coming back.

You keep them coming back, according to Kintigh, by moving from renter to an owner. How do you “own” a customer? Well, for starters, a Facebook “like” is renting. Facebook owns that customer. You’ve got to find ways to get your customers to subscribe to your product. John Deer, Kraft, and Red Bull are three of the companies who have done this the best and would be worth further study.

Make no mistake, these premises are starting points for content marketers and others who are interested in attracting attention and engaging with audiences on the web. In his book, Kintigh dives even deeper into the nitty-gritty of specifically how he and Intel iQ have found success. But until individuals and companies take this foundational principle seriously, they are in danger of spinning their wheels, wasting a lot of energy and resources, and losing money.

Chris Schumerth is an Indianapolis writer and current MFA candidate at The University of South Carolina. His work has appeared in Salon, The Miami Herald, Yahoo!, Punchnel's and a number of other publications.