The Book review of Talk Triggers, written by Jay Baer and Daniel Lemin

Nobody says, “Let me tell you about this perfectly adequate experience I had last night.” People don’t talk about good; they talk about different. That difference – the thing of yours that people remember and share – is your talk trigger.

After all, same is lame. We are psychologically conditioned to discuss what is different and ignore the average. A lot more than 19% of purchases are influenced by word of mouth, even if consumers don’t fully realize or recognize it (the same way that people unwittingly hum Katy Perry songs in the shower).

The timing of this book could not have been better. At a time where every brand is trying to use content to engage and influence, “Talk Triggers” strikes a fatal blow to the already dubious value of store bought influence.

Despite knowing the inherent drawbacks of branded content vs. honest word of mouth, companies continue to pour millions of dollars into content that is almost never taken at face value. Why is that?  Because buying media is neat and manageable. Trying to get people to say what you want is exactly the opposite:

Unwieldy and fraught with risk.

The book’s biggest strength lies in its ability to dissect and address the biggest constraints of triggering “talk” even it puts forth a framework to overcome and work around them.

But part of the problem is that “being different” is often thought to require no care or feeding. Most companies are content to let word of mouth just happen, expecting that randomly generated referrals will occur with sufficient volume and amplitude to sustain them. The businesses profiled in “Talk Triggers” take the exact opposite approach. They engage in word of mouth with intention. They have a plan and a purpose.

The objective of a talk trigger is for that communication to be more consistent and compelling than it would be organically. Talk triggers make word of mouth powerful and purposeful instead of circumstantial and uncertain.

Now despite our intuitive understanding of the value of sparkling honest conversations, as marketers, we are driven by a need to deliver clear and measurable results – preferably within the quarter! The book recognizes that in its stated vision for providing structure and scaffolding to give a clear, linear, understandable, and achievable system for what otherwise happens only by accident. With that context in mind, the book has both a theory and a practical side like every good course. It also takes the time to clarify overlapping and related concepts, such as social media marketing. The key difference as explained in the book is in our deeper motivations which skew towards “social signaling” as against honesty in larger groups, which makes social media analysis a critical but small part of the bigger story.

On social media, everyone’s like is curated, like a museum of the mundane. Offline, we still feel capable of showing our real selves and our real feelings about brands and experiences. It says something about me when I post something on social media.

Which would then beg the question as regards the statistical value and potential ROI of these conversations, even if there was a way to measure it. But even as it offers actionable frameworks, at its very heart, the book is more about illuminating patterns in an otherwise crooked path as against offering a 5 point one size fits all checklist. Like all good books, I might add.

The book goes on to clarify the four essential requirements for something to qualify as a talk trigger using case facts and examples. 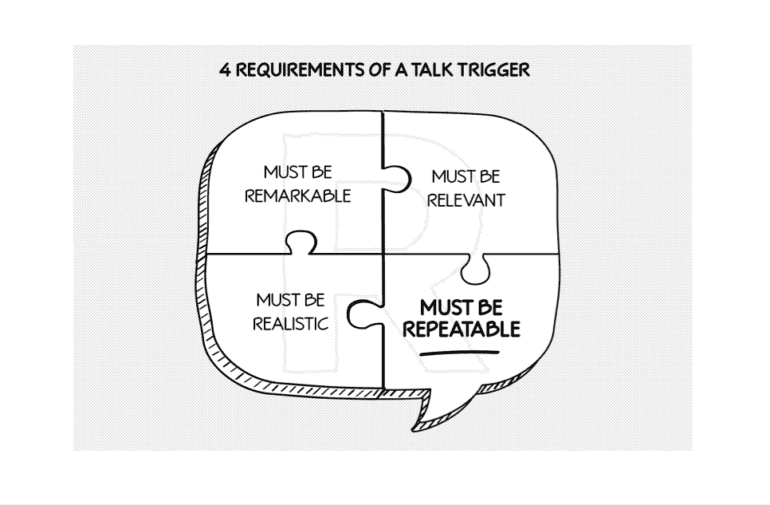 I cannot stress enough that while at first glance the concepts appear intuitive; this is NOT an exercise in the mundane. Like, within “be remarkable,” the book drives home the potential risk of losing out on one segment in trying to be special to another. Sometimes a differentiator is like a neck tattoo, it definitely stands out, but it’s not universally appreciated. A conundrum we are all too familiar with… as companies AND as people.

Things that take time to grow inherently invite skeptics. It is not unlike making Thanksgiving dinner using ingredients you planted during the summer. Slowly and carefully throughout the months,  you picked out weeds and warded off pests intent on their own premature feast until the time was just right to fetch the fruits from the trees and the vegetables from their vines. It is slow and methodical, but it leaves a lasting impression.

The book draws upon everyday examples that strike a chord even as they present what is often a contrarian point of view. From not wanting to be the “cheapskate dad who buys one large drink for the whole family to share” or trying to find the “habitable Goldilocks zone where the temperature is just right,” the book is an easy and enjoyable read till the last page. It is also peppered with some really great quotes from others, “It’s such a fine line between stupid and clever.” Also, at the end of each of the four sections, the reader is invited to reach out and share what they are thinking or ask any questions that they may have at that point, a few lines that provide a sense of intimacy and guidance.

The problem with surprise and delight is that it’s a surprise. It happens one time, to one person, in one scenario. That’s not an operational choice that creates conversation day after day after day. A talk trigger should be offered to EVERY customer, EVERY time. The impact of that differentiator is far greater in total because it is achievable by us all.

Before I end, I am going to simply use a line that Ted Wright used in the foreword that I think sums up my feelings on the book. “What we need is someone who can break down the true word-of-mouth process into its basic components and explain it in terms that everyone can grasp.”

The book does that, and much more. In addition to providing useful triggers for great ideas, real life examples, and a ready framework to develop your own ‘Talk Trigger’, readers are also invited to join an exclusive online community to develop their understanding of the subject further.

In addition to his latest book, Talk Triggers, Jay has also authored Hug Your Haters and Youtility. Jay’s Convince & Convert blog was named the world’s #1 content marketing blog by the Content Marketing Institute, and is visited by more than 250,000 marketers each month. Jay also hosts and produces the Social Pros podcast, which is downloaded 65,000 times monthly and was named 2015’s best marketing podcast by the Content Marketing Awards.

Befitting his roots in Arizona, Jay is a tequila collector and maintains his allegiance to the teams of his alma mater, the University of Arizona. Jay lives in the idyllic college town of Bloomington, Indiana, with his wife and children, and travels from Indianapolis to speaking opportunities worldwide.

He is the CMO and Co-founder of Selectivor, a food intelligence startup that helps people stay healthy through personalized eating.

Daniel regularly provides expert commentary on TV and in high-profile publications such as the New York Times, USA Today, CBS Radio, and Fox News, and speaks and leads workshops across the nation. He writes for the world’s most popular content-marketing blog, which appears on the Convince & Convert website. In 2015, he released his first book, Manipurated.

A native of Ohio, Daniel earned his MA in communications and leadership from Gonzaga University. He lives in Los Angeles with his cocker spaniel, Truman, by his side and enjoys the simple joys of gin martinis, jazz, and eating his way around the world — he’ll try nearly anything as long as it doesn’t bite back.

With more than 20 years experience in marketing, Neema Kapoor is the Managing Editor at Relevance. Neema has been a digital marketing strategist for over 10 years now. Prior to moving to digital marketing, Neema held roles in Sales, General Management and Marketing in organization such as the Taj Group of Hotels, QAI Global, the world’s leading process consultancy and HP. At HP she was the Country Category Manager, for a large and successful line of laser printers. Neema has a degree in Japanese and a post graduate degree in Business Administration. She is also a Certified Scrum Specialist, a training she undertook to bring more agility to content processes as part of her work as a digital marketing specialist.