Native Advertising has been referenced again and again as the future of content marketing. Spending on native ads will soar, and publishers should embrace the trend – it isn’t going away.

Revcontent CEO and founder, John Lemp, accurately predicted this change seven years ago when starting his company, whose mission is to provide quality native advertising and content recommendation in the media and publishing industry. Relevance recently had the chance to speak with Lemp about the company, its technology’s effect on content marketing today, and predictions for the future.

Friends’ evaluations of the industry are what inspired Revcontent’s founding as a response to a growing need. “We came together with this mission because we saw seven years into this industry Native Advertising and Content Recommendation was not all it was hyped up to be,” Lemp said. “We had friends at large media companies telling us the quality of advertising they were getting was horrendous, the revenue was nonexistent and no one was willing to innovate and provide the user experience they desired.”

Revcontent’s aim is to provide publishers and consumers with a content recommendation platform that creates the best possible user experience. “I heard one of our engineers compare us to the iPod of Native networks – we weren’t the first just as they weren’t the first mp3 player, but we are the most simple and most empowering,” said Lemp.

Boasting a partner list which includes Forbes, NewsWeek, InTouch Weekly, and more, Revcontent has developed into the world’s fastest growing native advertising network, despite entering the industry almost a decade after its competitors.

Holding their publishers to higher standards is what Lemp believes sets Revcontent above the competition. “We don’t want to work with just anybody, and we are extremely selective,” Lemp said. “We saw there was a race to the bottom in a lot of ways. Everyone is bragging that they have 80,000 or 100,000 people they are working with, but the quality of our network, content, and brands are so important.”

The content recommendations made by Revcontent helps their partners build relationships with users. The purpose is to keep users on their site and engaged with the content and the brand. Lemp explained Revcontent’s technology, Revcontent Personal Web, here:

“If you go to Newsweek, Forbes, CBS Television media properties, and more, you will now see a little green gear on the bottom right hand of our units where users can completely customize the ads they see based on what they love. For example, I love my faith, parenting tips, and anything technology – so that’s a few of the customizable interests I would use. We will be rolling it out to across our entire 200 Billion recommendations a month in the upcoming weeks.” 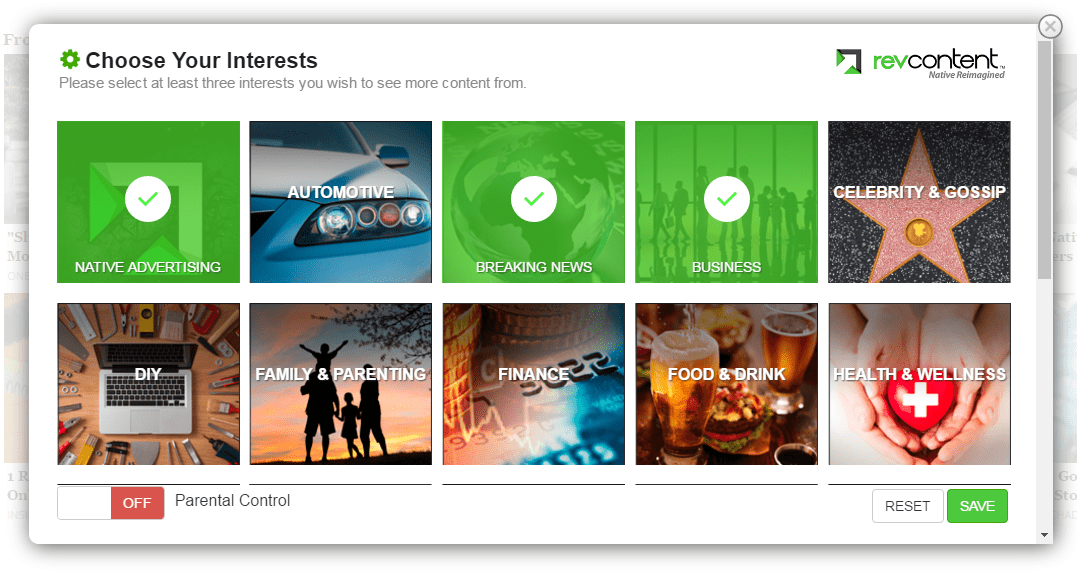 Giving users the power to customize the content recommendations they receive builds a stronger relationship between Revcontent’s partners and their customers.

Revcontent’s partners seek to provide their users with personalized content and content recommendations because they know it builds trust and a better overall experience. These values extend across industries and paying attention to technology can help companies achieve these goals.

Lemp gave insight into what he believes is most important for improving user experience. Website speed is at the top of the list. He brought up Google AMP to improve site speed. “One of the newer projects out there is Google AMP, who we partnered with, which is stripping out all of the slow annoying bits from mobile web pages and giving users a fast loading mobile experience, which is becoming a must have,” he said.

Providing a seamless experience across devices is also very important. Last year, mobile became users’ preferred device to access the internet, and as wearable tech continues to gain popularity, screens are only getting smaller. Lemp noted the importance of optimizing content for all devices. “No one wants to wait three seconds for content to load on an Apple Watch and then not be able to find what they’re looking for because they are exiting out of pop ups or trying to minimize a huge photo,” he said.

Lemp said the one guarantee for the immediate future is change and lots of it. He referenced this article and Business Insider’s Native Ad Report’s statistic that native advertisements will drive 74% of ad revenue by 2021.

Long term predictions from Lemp include the spread of native and the internet. “In the more long term future, eventually native will be all around us, and the internet will not be contained to a web,” he said. “I see a world where the web and the real world become one, and that world will be driven by intelligence.”

“We also always want to make those systems open, so no one can slow down the power of the people and the ability for the future of media to build relationships with people wherever they are. It’s our choice – an open world where media, innovation, and freedom flourish or a world defined and controlled by one single company. “

So, what do Revcontent’s technology innovations in content recommendation and these predictions mean for marketers today? Adapt to change or get left behind. Brands must be willing to change quickly and learn from mistakes made. Lemp’s final word of advice was to not fear failure when trying new things but, rather, expect it and learn from it.

Kaylee is Content Coordinator at Relevance.com, an online publication dedicated to helping marketing and communications executives solve their online content visibility challenges. She is a graduate of the Indiana University School of Journalism.