Over the years, fortunes have been made and lost on Google’s algorithm. Its technology has advanced leaps and bounds since its inception in the late 1990’s. What was once ripe for manipulation is now a search engine results page (SERP) that mostly delivers what Larry Page and Sergey Brin originally envisioned – relevant search results free from spam.

It’s taken Google many years to get its search engine where it is today. SEO is not something you do anymore; it’s what happens when you get everything else right. SERP success is now a trailing indicator of good PR and inbound marketing. Sure, there are some on-page best practices, but that’s not rocket science.

Several weeks ago, Visualsoft, an ecommerce marketing agency based out of the UK, asked if I’d participate in the creation of its interactive infographic Which Google Updates Have Had the Biggest Negative Impact for SEO. I agreed and answered a number of questions related to how updates have impacted my SEO efforts over the years.

They curated my answers and the answers of several other industry insiders and created a beautifully designed parallax scrolling website that takes visitors through 11 years of algorithm updates in an animated way. After reading this article you should definitely click through and give it a scroll. Bravo, Visualsoft!

Here are 16 of the many Google algorithm updates they featured:

This update was the very first to be given a name. According to Moz’s Google Algorithm Change History, this update was a combination of algorithm changes and major index refreshes. The announcement of this change took place at SES Boston. 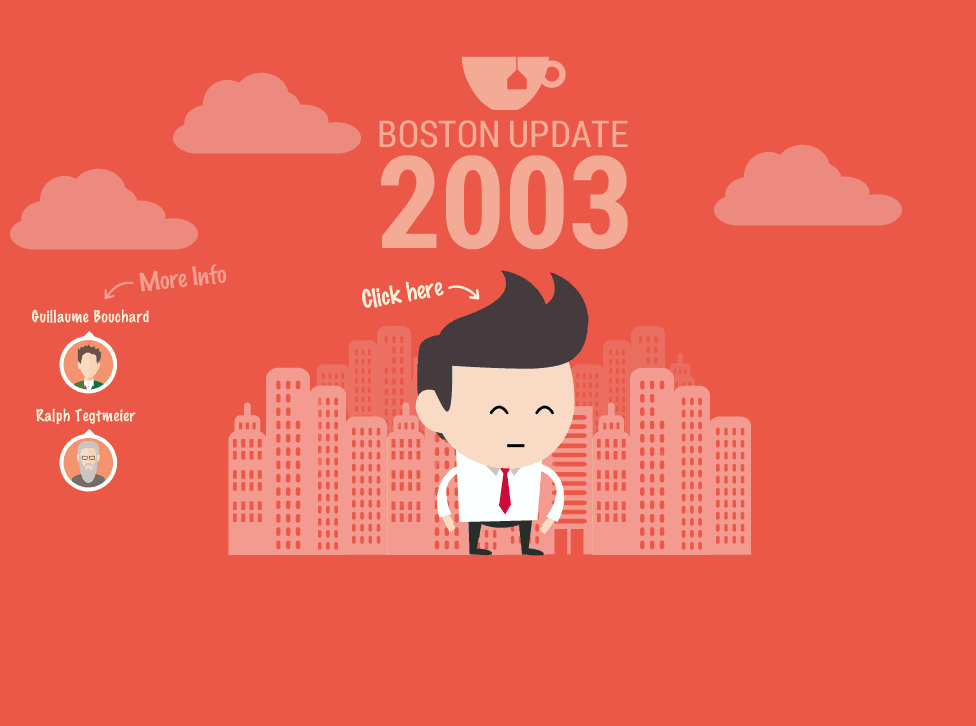 This was the first update that claimed to target link spam, like mutual links between co-owned websites. It also targeted hidden text and links.

The exact nature of this update was unclear, but the way inbound links were reported or counted seemed to havechanged in a big way. In addition, webmasters were seeing new Google bots on their servers that were bouncing.

This update is reported to have ushered in a new era of SEO by completely destroying the value of 1990s tactics. Massive keyword stuffing was severely hit.

This was purported to be the update to clean up what Florida missed. It further cracked down on spammy on-page tactics like invisible text and Meta data stuffing.

Webmasters speculated that this update changed how non-canonical URLs (www vs. non-www) and duplicate content were treated. It was also the first appearance of “GoogleGuy,” the Matt Cutts persona we know today. 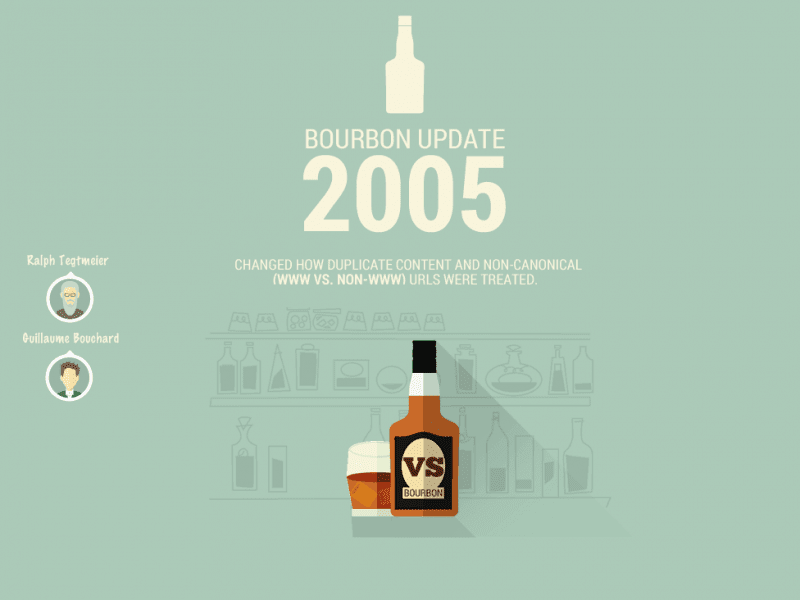 This update rolled out in December, but continued to rollout until March of 2006. This impacted URL canonicalization, site redirects and other related items.

According to Wikipedia, this update was not a deliberate one, but an accumulation of many smaller changes. Visualsoft reports the update focused heavily on keywords. 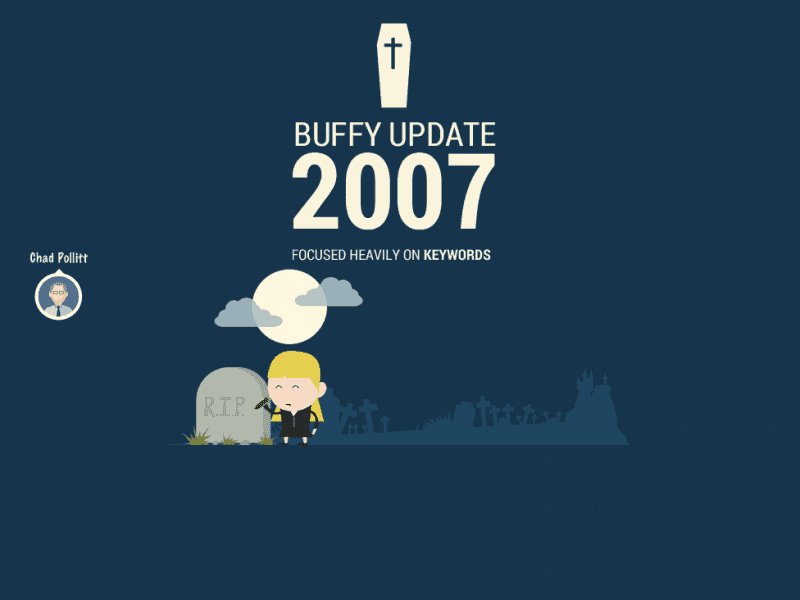 This was the first update that led webmasters to believe Google was favoring big brands in its SERPs. Cutts called the update minor, but the implications of showing favor to large brands is not a minor change for mid-market companies and SMBs.

This update directly impacted how and how fast Google indexed the Internet. It was a much needed technological update and laid the infrastructure to handle the vast amount of content being created today. Indexation moved from a stratified methodology to a more dynamic approach. According to Google, it resulted in a 50 percent fresher index.

SEOs named this update Farmer prior to its official release. However, when announced, Google named it Panda.The update focused on spam, thin content, content farms, scrapers and sites with high ad-to-content ratios. Many updates to this algorithm have occurred since its initial launch and continue today.

This update was an extension of the indexing infrastructure put in place by Caffeine. It sought to reward the newest most relevant content in the SERPs. According to Google it impacted 35 percent of all search queries.

According to Moz, this update appeared to have aggressively localized the SERPs by more tightly integrating local search data. 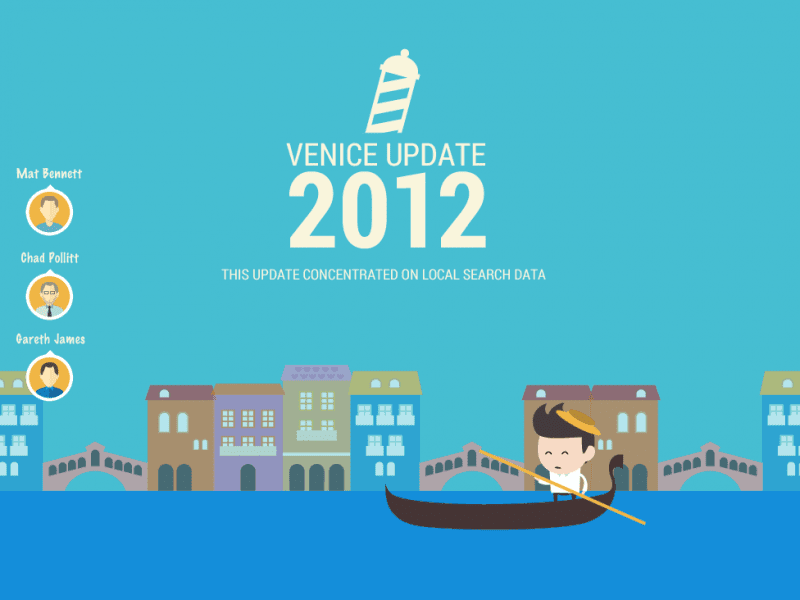 This update looked to identify and diminish websites that were considered over-optimized – sites built for search engines and not people.

This was a major update by Google. It was reported to have evolved its core algorithm and indexing infrastructure to understand the relationship between words and subsequent queries. It’s also reported to have laid a foundation for the Knowledge Graph and mobile search. 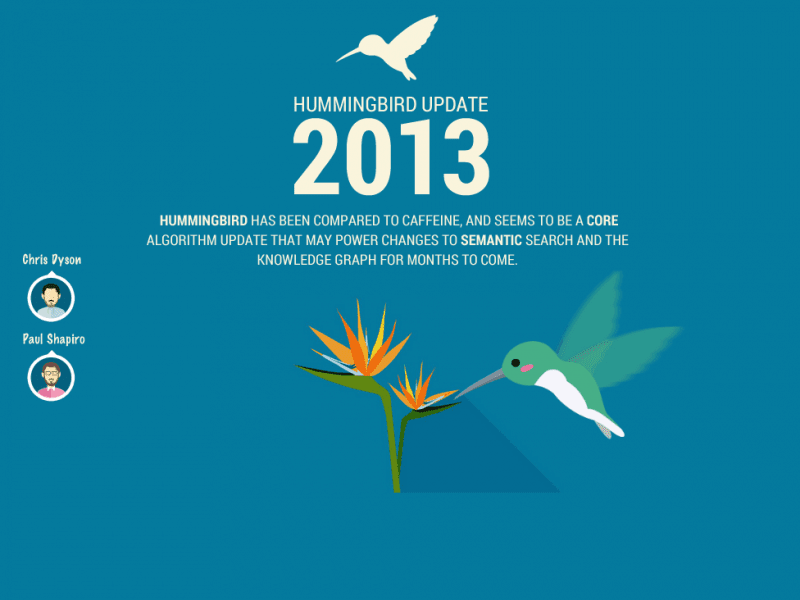 Many other updates are featured and covered by Visualsoft’s animated and interactive parallax scrolling website. Understanding Google’s past through these algorithm updates helps us understand where the search behemoth may be headed tomorrow. It is this writer’s opinion that Google is looking to completely eliminate the field of SEO in the future and to favor brands with the largest and most engaging online audiences.

It used to be that SEO professionals could create enough of the signals Google’s algorithm used to determine relevance. Today, however, it’s become increasingly difficult for an SEO to mimic the signals created by a true brand audience. It’s become easier, in most industries, to do good PR and growth marketing in order to build a real audience than it is to manipulate the link graph and sculpt on-page factors. There’s too much risk for manual or algorithmic penalty to do anything else but build real audiences by creating helpful and engaging content that people want to consume, share, cite and evangelize.

If you would like to connect with an SEO strategist to speak more about implementing innovative strategies, contact one here!