Published On May 18, 2018 Published By Genevieve Dietz 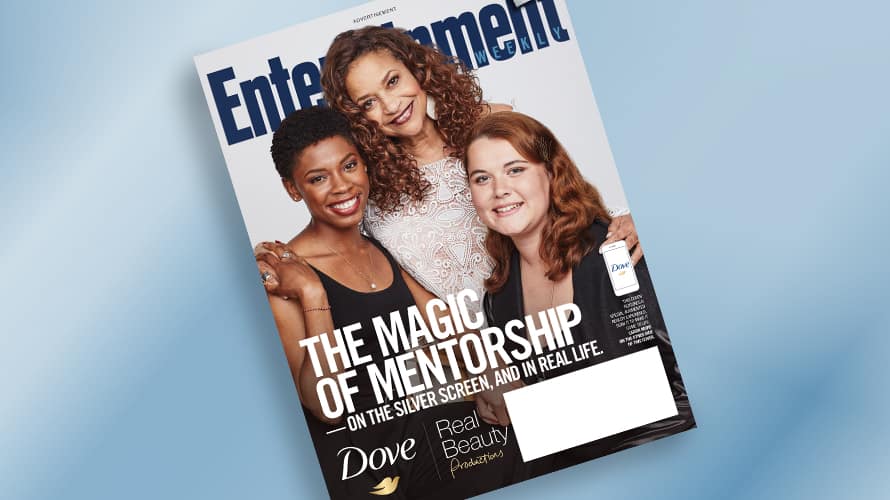 Dove is formally unveiling its Real Beauty Productions anti-bullying film “An Hour With Her” in the form of a scannable, peelable VR magazine cover. The film, directed by Debbie Allen features two women who talk about self esteem after facing bullies. One of the women, an actress named Chelsea who found comfort in the Dove Self-Esteem Project, has a heart-to-heart with Caralyn, a high-schooler dealing with cyberbullying.

“I think really this year, we’re telling the story of the power of mentorship and paying it forward to the next generation. It’s still very much about the empowerment of young women, but I like that it’s helping the next generation grow in confidence through the experiences they’ve had.”

Dove collaborated with marketing firm Edelman and media agency Mindshare to develop and promote the film’s release. The film is integrated with the Life VR app so once readers download the app they can scan the cover and view the film. The cover will hit the shelves starting today, followed by two more on July 13th and September 28th.

VR and AR tech is steadily becoming more mainstream, crisp, and accessible and more publishers are starting to view it as a viable editorial tool and storytelling enhancer. For some publishers, like EW and Sports Illustrated, virtual reality has allowed them to create more visually sharp and engaging content marketing campaigns with brands.

When we integrate virtual and augmented reality into our content marketing strategies, we are essentially telling our audiences that we are relatable, on-trend, and willing to accept and embrace change. Finding success as one of those in-touch and relatable brands is the Holy Grail for all of our content marketing endeavors.

It’s common knowledge that people pay attention to the brands that are in tune with tech culture. They are more willing to connect with the brands that decide to create content that is more emotive and authentic instead of salesy and cold.

VR and AR integration can propel our marketing strategies into the future and, contrary to popular belief, it doesn’t always have to be costly. Snapchat’s Lens Studio allows brands to create AR lenses easily and cost effectively. The Lens Studio has received over 30,000 submissions since launching in December and lenses have racked up over 1 billion views by Snapchat users.

Multiple companies like Oculus and Lenovo are coming out with cheaper VR headsets and apps like Life VR make it easy for viewers to see VR content on their mobile devices.

The VR/AR space is increasingly competitive but cheaper VR headsets and Snapchat’s approach to AR has made the tech accessible, fun, and engaging for both publishers and users.

Dove’s first venture into the VR space could inspire other brands to piggyback off of VR’s popularity and create their own mixed reality campaigns. The message of Dove’s campaign is one of unity. It’s a timely yet timeless campaign that evokes hope and poignancy.

The VR element is just an enhancer to an already wonderful piece of storytelling. By all means we should all start exploring VR/AR options sooner rather than later but we should also take a page out of Dove’s playbook. Make sure your stories truly mean something before you overlay it with tech enhancements and your audience will reward you for it.

What are your thoughts on VR/AR? Do you think it’s a worthwhile content marketing enhancer? Continue the conversation in the comments.