The lines between the media, brands, agencies, new media, social media and search engines are blurring faster than most realize. This was covered in depth on Mark Schaefer’s blog and my Huffington Post column. The need, desire and promise of native advertising are major factors in this blurring and everyone is trying to get a piece of the action.

While in Boston recently attending HubSpot’s inaugural Inbound Publishers Summit, I got to meet dozens and dozens of publishers who, by all accounts, are beginning to offer agency services to brands in order to harvest media audiences for leads. This is understandable because it’s getting harder and harder for brands to create their own organic audiences to mine for leads. Legacy media outlets have struggled since the late 90’s to grow profits. But, offering digital native advertising campaigns with cost per lead agency services seemed poised to fix this problem.

The media, however, isn’t the only group trying to profit from native advertising. Many others are positioning themselves at the trough, too. Ultimately, though, the media is in the driver’s seat of this arms race and the reasons why are quite simple.

The Line Between Media & Brands is Blurring Fast from Chad Pollitt

This deck is filled with .GIFs. In order to view them you must download the presentation and open in full presentation mode – http://bit.ly/1ORZcUC

The Combatants of Native Advertising

The publishers I talk with all tell me print media is on life support. As a result, many of them have built robust or specialty niche audiences (which tend to be highly sought after by prudent brands) online. With the amount of content on the Internet expected to grow by 500 percent by 2020, access to these audiences will be even more desirable by brands.

Add to that the ratcheting down of organic social media visibility and the fact that search engines can’t possibly provide visibility for 5x more content than we see today, only one other scalable content distribution channel exists – native advertising with publishers. Earned media is an option, but it’s almost impossible to scale.

Website only publications like the Huffington Post, Mashable, Buzzfeed, Upworthy and ViralNova that have appeared on the scene the last decade or so have proven business models that are insulated from the unprofitability of traditional media models. Many new media outlets were early adopters of native advertising and have the revenues to prove it.

Venture capitalists are investing in droves. Look to new media to continue its innovation in native content distribution. As publishers, most new media “get it” that they don’t need third parties skimming their native profits. That’s why many of them have full-fledged agencies poised to sell, build, run and report on campaigns.

Tools like RevContent, Taboola, Adblade and Outbrain fall into this category. They aren’t the only ones, but tend to get the most press. There are dozens more. Some even have robust service layers – agency-like services. These networks are all growing, but they have one fatal flaw. They need publishers to deliver native advertising on. If publishers decide to do their own native campaigns the content distribution networks won’t be necessary. Publishers are beginning to provide agency services to do just that, too, rendering third-parties irrelevant. 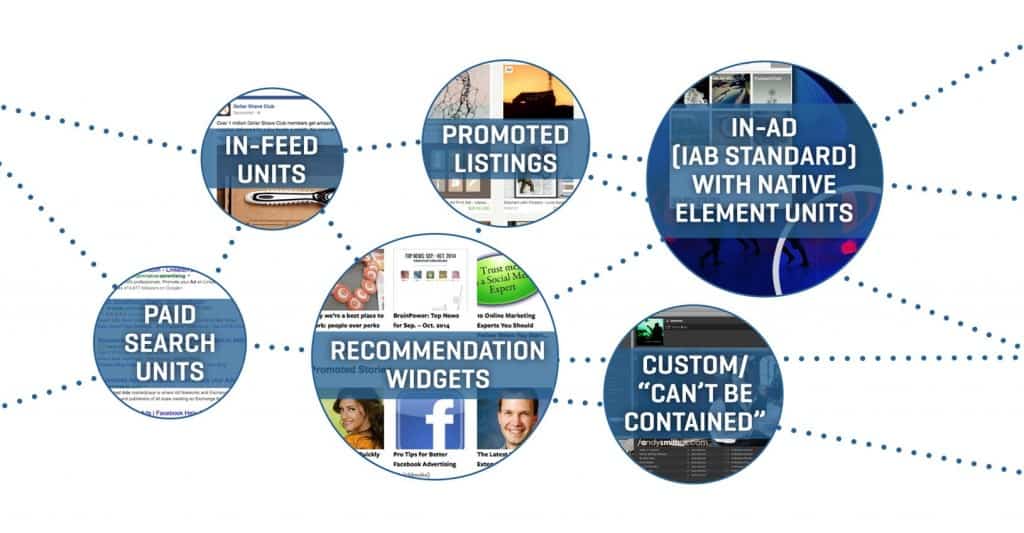 Many of the major social networks are offering native in-feed advertising now. Tumblr just created an agency to help facilitate connections between brands and popular bloggers for sponsored content. Facebook also announced that it will likely be syndicating articles directly from media outlets. This is undoubtedly a plan to pilferage even more revenue from the media. Again, the fatal flaw here is that they need the media to make this happen. The media doesn’t need them.

LinkedIn, on the other hand, has its extremely popular Pulse network full of original content. Look to LinkedIn to start offering even more native advertising within its network. Pulse is its own media outlet, unlike Facebook, and doesn’t need the media.

Yahoo, AOL and Google are positioning themselves to massively profit off of native advertising. Yahoo owns Gemini (a content recommendation engine) and more than a dozen media outlets. AOL owns Gravity (another content recommendation engine) and some of the most popular online media outlets on the Internet today. Both stand to profit off of native advertising on their own outlets, but by owning Gravity and Gemini will try to purloin native revenue from other publishers.

Google, on the other hand, has its native network in private beta, poised to launch at any time. Its network will offer content recommendations like Taboola, Gemini and Gravity, but will also compete directly with startups like NewsLauncher, blogs and publishers selling sponsored articles. However, without publishers Yahoo and AOL are stuck distributing content on their own publications and Google can’t do native at all.

Marketing, advertising and PR related service agencies have existed for more than 100 years and will continue through the native era. Like content recommendation engines, agencies will act as third parties, connecting publishers with the brands they represent. This will likely prove to be profoundly profitable and valuable in the near-term for all parties involved. However, as the media’s internal agencies start to ramp up and get good at selling their services, expect traditional external agencies to do less and less native advertising. The media doesn’t really need external agencies to deliver native advertising.

With organic search and social becoming less effective over time and pricing for paid search and social rising, brands will begin to look elsewhere for content distribution (some already have). While many are investing in building their own organic audiences today (brands like Intel, HubSpot, Ben & Jerry’s, Netflix, GE, AARP, Ford, American Express and many, many others), they’re also looking to grow their audiences through native advertising.

Brands that are successful at building their own media outlets may begin to compete with traditional and new media by offering native advertising, too. Adobe’s CMO.com could do it today if it wanted to. Until that happens, however, look to brands to fund this new native arms race, and in the process deciding who the lasting winners will be.

No matter the combatants, the story above is about a war over who will become the main gatekeepers of audiences in the future. With 5x more content expected online in just a few years, these gatekeepers stand to rake in billions of dollars. Right now it’s still search engines and social media.

However, online publications ultimately command more combined audience share than search and social. This means that online media has an incredible opportunity to be more profitable than what it has been in decades. And in the process, dimmer the native aspirations of the search engines, third-party connectors, social media and agencies.