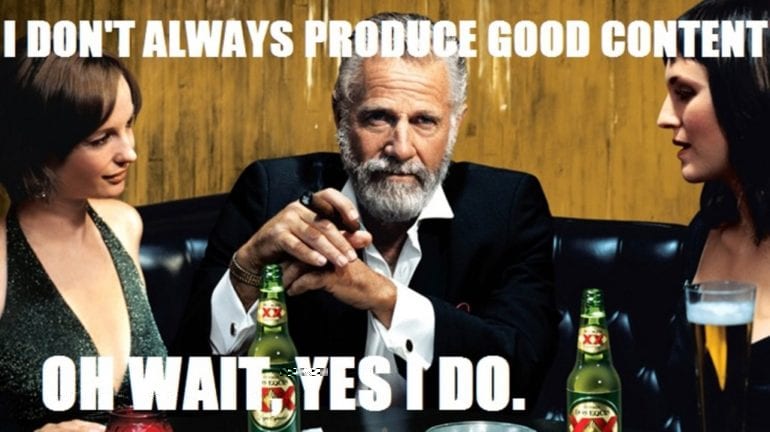 Of all the brands that are known for hijacking the Cinco de Mayo tradition and turning it into an advertising opportunity, Dos Equis is perhaps the most famous. But the brand has earned the right to its title—each year it creates catchy content that resonates with its target audience in a humorous way, and this year was no exception.

Dos Equis, a Mexican-based subsidiary of Heineken International, launched “The Most Interesting Man in the World” in 2006 to make inroads in the USA as a premium import beer. This mysterious bearded character appeals to Dos Equis’ target audience of males aged 21 to 34 by portraying the brand as mysterious and extraordinary, an image crafted in intentional contrast to that of Corona, Dos Equis’ biggest competitor (and the top selling Mexican import beer in America).

Despite trailing Corona in sales, Dos Equis is second to none in context marketing—delivering effective content to consumers through the right channels at the right times. With another year gone by and another Cinco de Mayo celebration underway, Dos Equis has capitalized on the opportunity by creating a series of witty TV spots, once again earning the brand the title as the undisputed champion of Content de Mayo. The following commercial aired last Friday on Comedy Central during “The Colbert Report.”

As it draws attention to the fact that May 5 of this year falls on a Monday, the TV spot insists that Cinco de Mayo is “not just a day, it’s a state of mind—and it deserves a weekend celebration no matter when it is.” Dos Equis took a similar approach last year when Cinco de Mayo fell on a Sunday. Both commercials are efforts in the brand’s movement to make the Cinco de Mayo tradition a four-day event, beginning with “Dos de Mayo.” Sounds like a good idea for increasing beer sales, right?

Dos Equis is just one example of a powerful brand that engages consumers with content marketing. Most impressively, though, it has established a long-standing track record of delivering popular content across its various channels within the right context. There is much that can be learned from brands like Dos Equis that are on the cutting edge of context marketing—and this Cinco de Mayo is just the beginning. Expect more from this brand in the future.

In the meantime, check out this Content Marketing Hacks eBook to learn how to efficiently make content work for you.