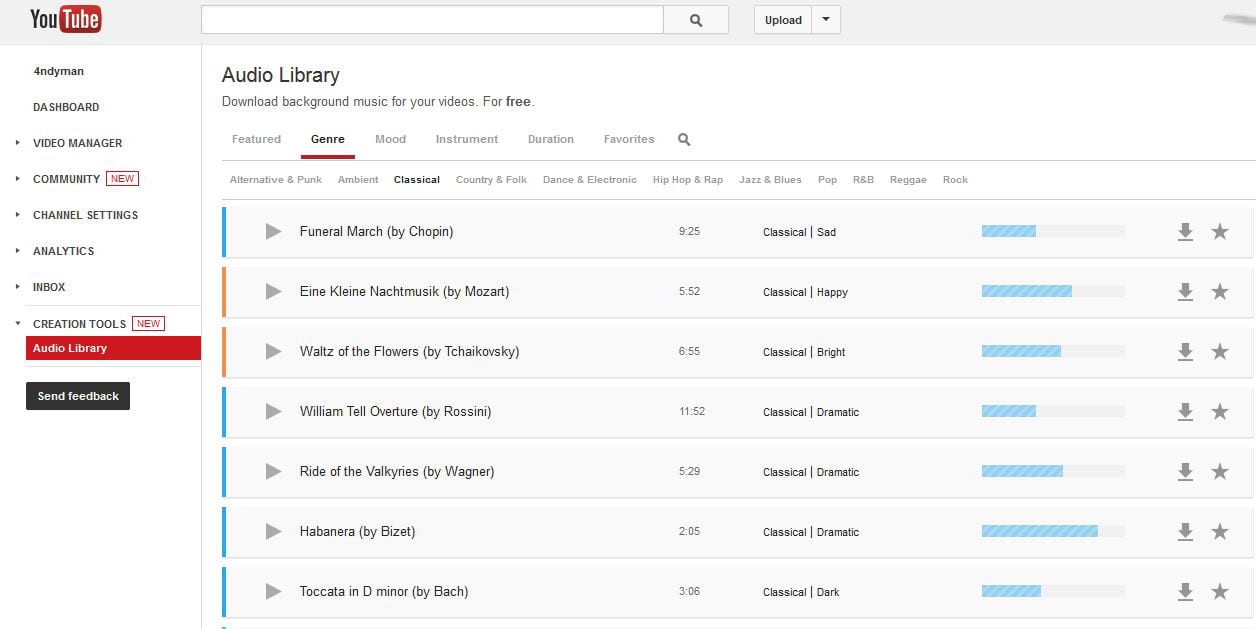 Your YouTube marketing videos just got better soundtracks. YouTube has launched a new Audio Library that allows users access to royalty-free music tracks for background music in their videos — or even for other creations outside YouTube.

You can find 150 tracks now under Creation Tools in your Video Manager, and that number will only grow

There were reasons to be skeptical about the Audio Library. Too often, the focus is on free — companies hope to attract customers simply by offering something for nothing, banking on the hope that customers will come in just because it’s free. But the old saying is so often true: You get what you pay for.

So I was skeptical when I logged into YouTube to check it out. I expected to find, at best, short, loopable “musical” tracks of mediocre compositional quality rendered by technicians with more knowledge of GarageBand than music, or at worst, some recognizable yet excruciating Muzak.

The quality and range of music on offer is impressive. You can sort music by Genre (from Alternative & Punk to Rock), Mood (Angry to Sad), Instrument (Acoustic Guitar to Trumpet) and Duration (currently, 1:16 to 23:41), so you don’t have to listen to all tracks to find the right one.

As a classically trained musician, I naturally clicked straight through to the Classical genre first. Expecting to find mundane musical contraptions by Mannheim Streamroller wannabes, I found instead the kind of classical tracks from well-known composers that both novice and professional filmmakers actually look for. You’ll find, for example,

What’s more, the tracks are complete and sound good. Really good. If these tracks were created electronically and not with a live orchestra, then the sound engineers should be asking for raises.

YouTube and Google didn’t do this by half-measure. Although some of the tracks certainly were created straight from software — especially those in the Ambient genre — even those are generally pleasurable and well-done.

YouTube has set the quality bar high for this one, and it can mean great things for video advertisements. Don’t underestimate the effect of a good soundtrack to stir a viewer’s emotions; those emotions are what connect viewers to your videos and your brand.

Interested musicians can put their own works up from consideration for inclusion in the Audio Library. The process for getting a track on the list isn’t entirely clear, but signs point toward human curation: musicians submit contact information and a link to an audio file and not much else. Hopefully, this means that someone will listen to submitted tracks and judge their quality and usefulness before being greenlighted for the master list.

This provides an interesting marketing opportunity for well-known, professional musicians as well. Will we start seeing new tracks from social-savvy singers (nudge nudge wink wink, Amanda Palmer), older tunes from pop icons (are you listening, Billy Joel?) or anti-conformist anthems from musicians with a history of standing up for music, as opposed to the music industry (I’m talking to you, Pearl Jam)?

So bravo, YouTube, for creating a high-quality, free resource for your customers. The Audio Library has the potential to raise the quality of YouTube videos as a whole. Or, at the very least, make them more pleasurable to listen to.

Take a look at what the Audio Library has to offer. What other tracks would you like to see there?