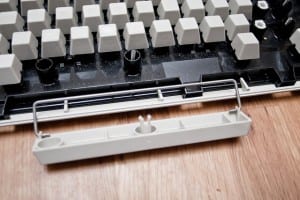 Prior to this century, the youth of this nation were taught to always double-space after a period, colon and some other rarely used punctuation marks. That’s the way I was taught in my high school keyboarding class (remember the home keys?). Up until the 21st Century, this was a common typographical convention used by printers to create pleasing and consistent spacing, while enhancing readability – with few exceptions. However, today, double spacing content online can detract from the overall user experience of the reader.

According to Wikipedia the 1950’s ushered in the recommendation of 1.5 spaces which persisted until at least 1996. Since most typewriters and computers didn’t offer that as a spacing option people continued to teach and use the double space. Typewriters and early computer fonts used monospaced type – also known as fixed-width font because each character occupies the same amount of horizontal space.

Double spacing allowed for sentences crafted using monospaced fonts to be clearly identifiable. Today’s modern fonts alleviate the need for double spacing because their widths are dynamic, as opposed to fixed.

Farhad Manjoo of Slate.com says that “Every modern typographer agrees on the one-space rule” and that “Every major style guide prescribes a single space after a period.”

Since most web fonts are dynamic in width (Courier is the only exception) there is no practical need to double space for sentence delineation online. Unfortunately, studies done this century on the impact of sentence spacing on readers have been inconclusive.

However, anyone with the knowledge that double spacing is wrong will undoubtedly have a negative user experience and brand perception if they land on a website full of double spaced sentences. Manjoo also cites aesthetics as the main reason typographers prefer one space over two. If double spacing is ugly on print it will also be ugly online.

Most double spacers blame their teachers for their bad habit – and rightfully so. However, some webmasters actually blame their website’s cascading style sheet (CSS). If the formatting on a website requires sentences to be double spaced for readability then fix the CSS.

It’s time to stop making excuses and force yourself (and web content contributors) to use single spacing. Many years ago I made the conscience decision to stop double spacing. It took nearly 12 months to completely eliminate that bad habit. Now that it’s gone consumers of the content I create won’t think I’m an idiot (at least not for double spacing) and visitors to our website can have a consistent and proper experience with our brand.

Stumbling Toward Success: The Singular Story of StumbleUpon