Published On June 21, 2018 Published By Catalin

Successful B2C and B2B marketing hinges on effective communication. When it comes to B2B communication, email pitches are important means of reaching out to potential leads. But you need to be precise in how you manage them.

This Is How You Don’t Make Email Pitches

Let’s check out some examples of how not to make your email pitches:

It goes without saying that you need to be perfect in your grammar. No typos or punctuation errors, please. This is to convince the reader that you have taken the effort to ensure your email pitch is professional and appealing. Here’s an example:

There’s no doubt that this email is carelessly and hastily written. While some readers may overlook the errors, most would just toss it aside since they’re already receiving plenty of emails.

This is one of the vaguest email pitches there ever has been. The sender identifies himself as “just an ad specialty sales rep”. That’s followed by a typo – “hear” instead of “here”. He also fails to mention how he can be useful for the business of the prospect. And instead of asking whether it would be appropriate to schedule further communications, he instructs the reader to contact him.

Fractl quotes a great example of how not to do it. 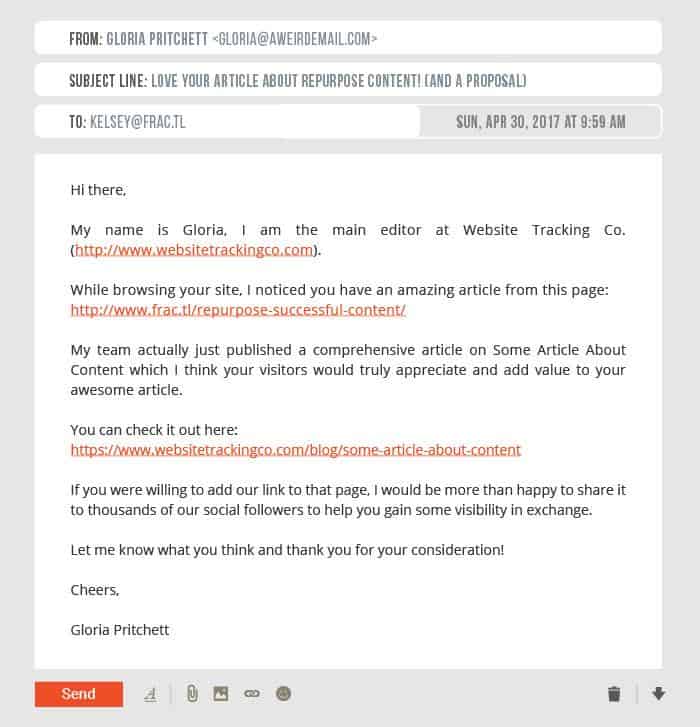 Fractl points out multiple issues in this email. Apart from the grammar issues, there are also issues with how the pitch content is framed.  One positive aspect of this is that it clearly mentions in the subject line that the sender is making a proposal. It gives the reader a clear picture of what to expect. But the body of the email begins with an impersonal greeting, “hi there” instead of “hi Kelsey”, who’s the recipient.

It is essential that the name of the intended reader is mentioned to make the email sound like personalized communication instead of appearing as if it came from a cookie cutter template.

The other main issue here is that while Gloria says the article on her site would benefit the reader’s article, she doesn’t exactly mention how it would be appreciated by the Kelsey’s readers. Sure, Kelsey (the recipient) can click the link and check out the article, but it would be better if the sender mentions it briefly in the email itself. Also, she says she found the articles on the reader’s site “amazing”, without actually explaining specifically what aspects she found impressive. That would probably connect with why Gloria thinks her team’s article would help.

Finally, the exchange approach at the end of the email doesn’t quite cut the cake for the reader. Gloria says that if the reader adds the link to her article to their page, she would share it and help the reader’s site gain more visibility. Quality sites add links because they contain further authoritative and quality information, not in return for any benefits.

Now let’s look at another example of a poor email pitch, also mentioned in Fractl.

This is quite easy to figure out. The whole pitch appears to be hastily hashed up, without any thought given to it. Generalized and vague pitches like these wouldn’t be thought about since there just isn’t anything worthy here.

The email starts with the subject line that states “Marketing Services”. Now, Kelsey will be receiving thousands of other kinds of emails too, and not all of them are sales pitches. The subject lines of these emails appear in the inbox and that’s where the reader sees it and perhaps decides whether to open the email or not. “Marketing Services” typically sounds like a prospective client looking for some marketing services from the business. But on opening it, Kelsey realizes it’s something else entirely. That feeling doesn’t go down well.

Moving on to the email body, the sender mentions that he works with marketing service providers offering “similar marketing services”. How are they similar? And how would bundling Marketing123’s platform help develop “a recurring revenue stream”? A concise description of these aspects would probably give the reader a desire to contact the sender for following it up. Otherwise, it’s just one of the many emails that clog up the inbox.

5. Not Understanding Shades of Meaning and Choosing Words Accordingly

Choosing the right words is something that should never be overlooked. The sender mentioned above followed up this email to Fractl with another email containing links to webinars describing their services. One wonders why he didn’t send these links in the first email itself. But there are flaws here too: 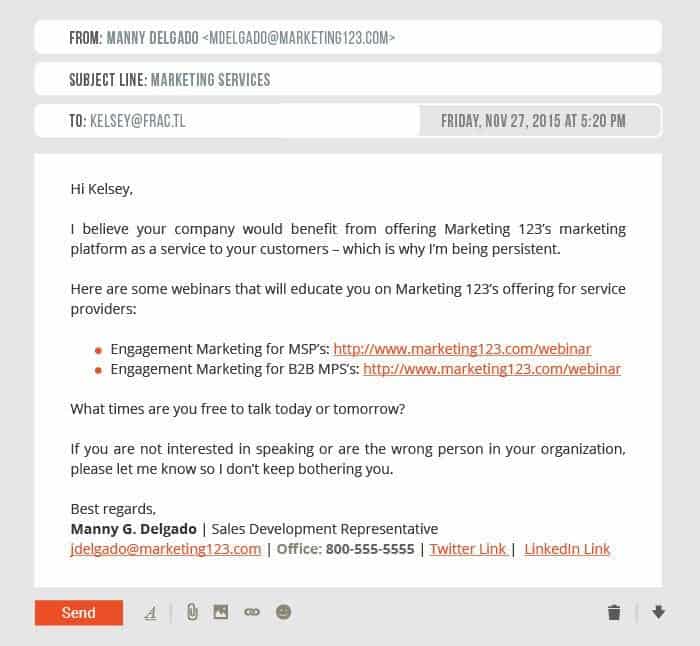 Again, he fails to demonstrate what he’s researched about the sender’s company. There’s no indication whatsoever of how his service would benefit Kelsey’s business. The webinar links are provided alright, but he says they are to “educate” Kelsey.

Here’s the catch – Manny fails to realize that Kelsey’s company, Fractl, offers Internet marketing services and they don’t need any kind of education in this regard. And the conclusion is totally inappropriate. It doesn’t foster the hopes of further communication between Manny and Kelsey. Indeed everything ends there and there’s a potentially great marketing opportunity lost.

Let’s move on to another example which is descriptive all right, but a bit too descriptive and yet there are key elements missing.

Here, the sender starts right away with his company and services and does not suggest having researched about the reader’s business at all. He says that he isn’t running a “normal SEO agency”.

So what? What aspects of the reader’s business or website can he help improve?

Chris says he’s willing to prove that his is an SEO agency with a difference, but has forgotten to mention why that should matter to the sender. Again, Chris assumes stuff. He assumes that the reader receives a lot of emails and that he’s been cheated by an SEO company.

The subject line is probably the most misleading of all. It says, “Help”. What does that mean? Does the sender need help or is he offering help? The greatest error of this email is there just isn’t any personalization. The reader isn’t even addressed and Chris jumps straight to the body.

7. Pleading, instead of Presenting

Most internet marketers have pointed out that people use the word “please” unnecessarily. Here’s the example:

I’ve got this awesome data about PR pitches that I’m sure you’ll find fascinating.

Please could you feature it on your site?”

The sender feels that using “please” would be expression of politeness to impress the reader. But that only helps to repel the reader rather than attract him. It gives the feeling that the sender is desperate and has no means of extracting earnings from their services and so somehow needs the reader to help him out.

Here’s how it should be done.

I’ve got this awesome data about PR pitches that I’m sure you’ll find fascinating.

It’d be great if you could take a quick look at it, and if it’s a good fit you’d be welcome to use it.”

Another suggestion is to avoid flattery. Just as excessive politeness doesn’t work, flattery can backfire too.

I’m a huge fan of your blog. I especially loved your latest piece on growth hacking. Take a look at this…”

The sender merely states he’s a big fan of his blog. But, there’s no proof to suggest he has actually read it. If he is indeed a fan, he should point out one or two aspects of his blog posts to show what he’s impressed with and how that is connected to what he wishes to offer. This is the right way to put it:

I know you’ve written a lot about growth hacking recently so I thought this new data on SMB’s attitudes to growth hacking techniques would interest you.”

We’re all getting pretty frustrated by how often Google changes its goal posts, and want to know how we can pre-anticipate their next move.

As a result, we did the research and put together this document…”

This is an example of the sender just focusing on his/her issues. They assume that reader also goes through the same issues. Well, it needn’t be that way, and the reader could get disconnected with the whole thing. In fact, the sender forgets that his services are supposed to benefit the reader and his website/business. So, if the reader doesn’t go through the same issues (which the sender assumes he does), then what point is there in the services offered? Here’s an example:

I saw your post about Google’s recent algorithm updates, and I could tell that you get quite excited about these changes. Personally, I’m getting pretty frustrated with how they keep changing the goal posts, so I thought you might be interested in exploring an alternative point of view…”

That’s much better since the sender has demonstrated that he has read the editor’s post, and the great thing is, even though his opinion differs, he’s still able to convince him that there is something in his document for him to benefit from.

Let’s look at our final email pitch, this one coming from Fractl too:

Here, the sender, Cam Tucker, has tried to be innovative and unique in his approach. He probably thought that would attract the reader. It’s perhaps for that reason that he decided to include two statements about how much time it would take to read his email. What he hasn’t realized is that he’s just wasted his and the sender’s time by these unnecessary words. And he also made the mistake of inserting an emoji.

Emojis must never be used in professional correspondence, unless you know the individual beforehand and you’ve already formed a relationship. The other issues we saw in the previous email examples also remain, such as abstaining from:

Details about the sender’s company

Any links to their information, and

Any explanations as to how exactly their services would help Fractl

And it’s unwise to ask a single location US-based company to give its Australian number when it doesn’t have an Australian office. It shows that Cam (who knows if he’s a real person) has done no research on Fractl, and this is just a common email he keeps sending to many businesses.

Armed with these examples, you should have a clearer picture of how not to make email pitches. There’s immense potential here if you put yourself in the shoes of the reader while framing your next email pitch. An easier proven marketing hack is to use custom email templates from tools like MailChimp or Constant Contact but ensure that you tweak it based on recipients so that it doesn’t look too templated.

Catalin is the founder of Ecommerce Platforms and Web App Meister. He's a design enthusiast and loves matcha, and is uber passionate about blockchain technology and travel.