The number of shares an article receives has become ubiquitous in online content; widgets that show shares, tweets, pins, and +1s appear front and center on nearly every post you read.

Just how many times does content get shared? Where do people prefer to share it? And are some publishers more effective than others at generating highly shared content? These questions are crucial to content marketers looking to understand the key components of a viral marketing success, and our recent research collaboration with BuzzSumo is here to give you some answers.

For this study, we partnered with BuzzSumo to analyze the 1 million most-shared articles from the first six months of 2014. Collectively, these articles generated more than 2.6 billion shares on five social platforms—an amount that roughly equates to eight shares per every man, woman, and child in the United States, or two shares per every single person in China.

The volume of shares alone is staggering, but to look a little deeper, we also applied the Alchemy API to calculate the sentiment of the 500 most-shared articles on each channel, as well as an analysis of the relevant keywords in article headlines. These insights have given us a comprehensive look at who and what is winning on each social media network.

One of our first findings was that the size of the network is not always reflective of the engagement of the users when it comes to sharing. According to a recent Pew Research study, the largest four social media platforms, in order, are:

(Google+ was not ranked.)

However, our analysis of the 2.6 billion shares generated by the top million articles in the first half of 2014 showed that the most engaged platforms, in order, are:

Twitter users appear to be more active sharers than LinkedIn users, based on the volume of shares they generated versus the size of their network. But Facebook users dominate both network size and engagement; Facebook alone generated more than 2.18 billion shares of the articles in our study—an astounding 81 percent of the total shares generated. 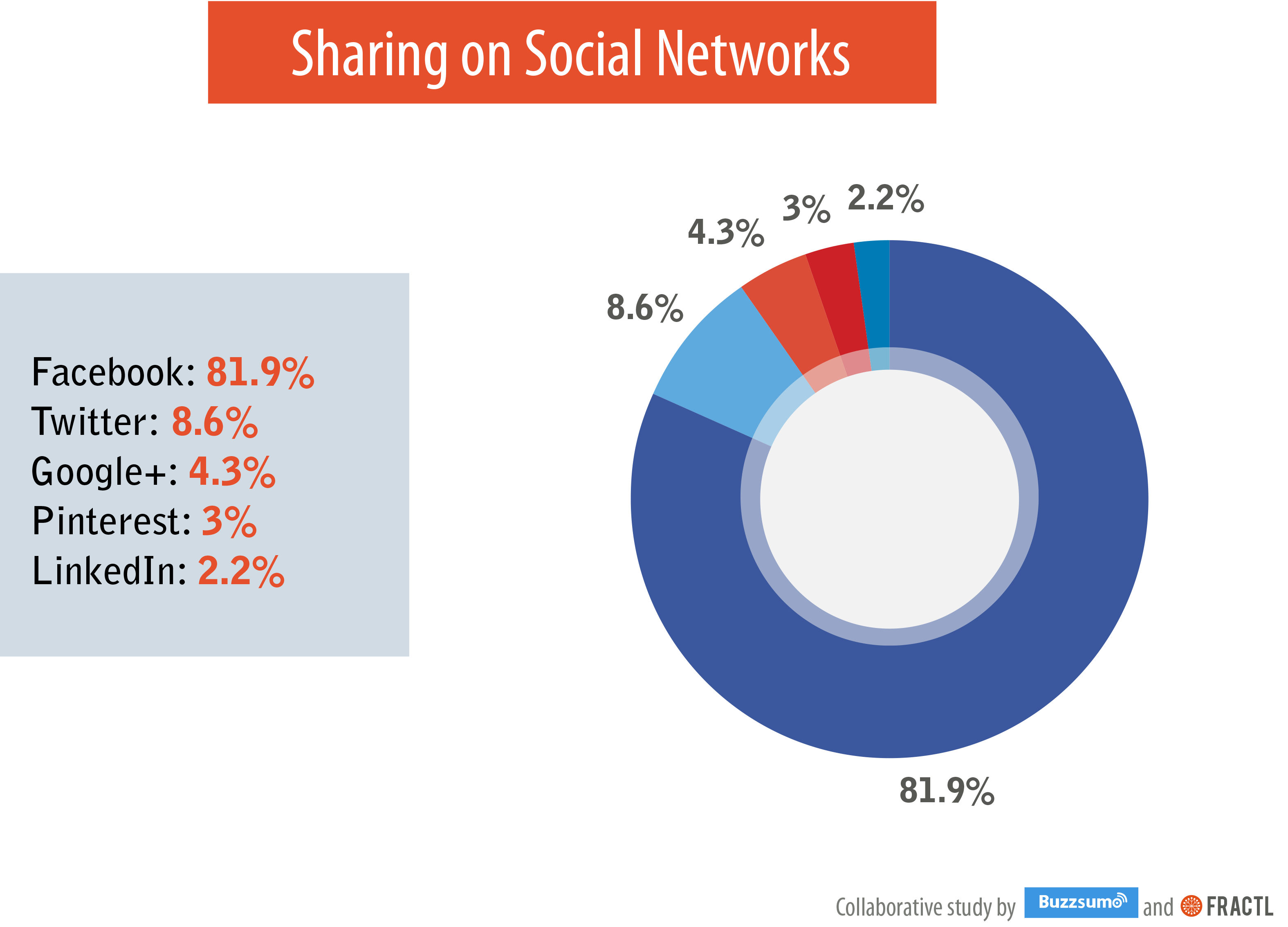 Facebook clearly has the ability to magnify share rates thousands, if not millions, of times more than the other social networks at this point in time; however, there appears to be a specific type of content that is shared most on the giant platform.

In addition to size and engagement, another key difference between social media networks is the sentiment of the articles they chose to share. When we applied the Alchemy API to analyze the text, opinions, and attitudes of the articles shared on each platform, we found that different emotional preferences emerged by channel.

What does it mean to be winning at social media, and which publishers are succeeding in sharing? The answers are different depending on the questions you ask. The biggest takeaway from our analysis of publishers on social media is that none have become omnipresent on all channels; the field is still wide open for effective, efficient content promoters to gain audience attention and engagement.

When we looked at the 190 publishers who published the 1 million most-shared articles in our study, we did not find that a single entity dominated every social media network. Instead, there emerged multiple publishers succeeding on different platforms in different ways.

By number of shares: If the contest were based on sheer share volume, BuzzFeed would win, hands down. With more than 400 million total shares, this publisher earned nearly 150 million more shares than second-place publisher Huffington Post. 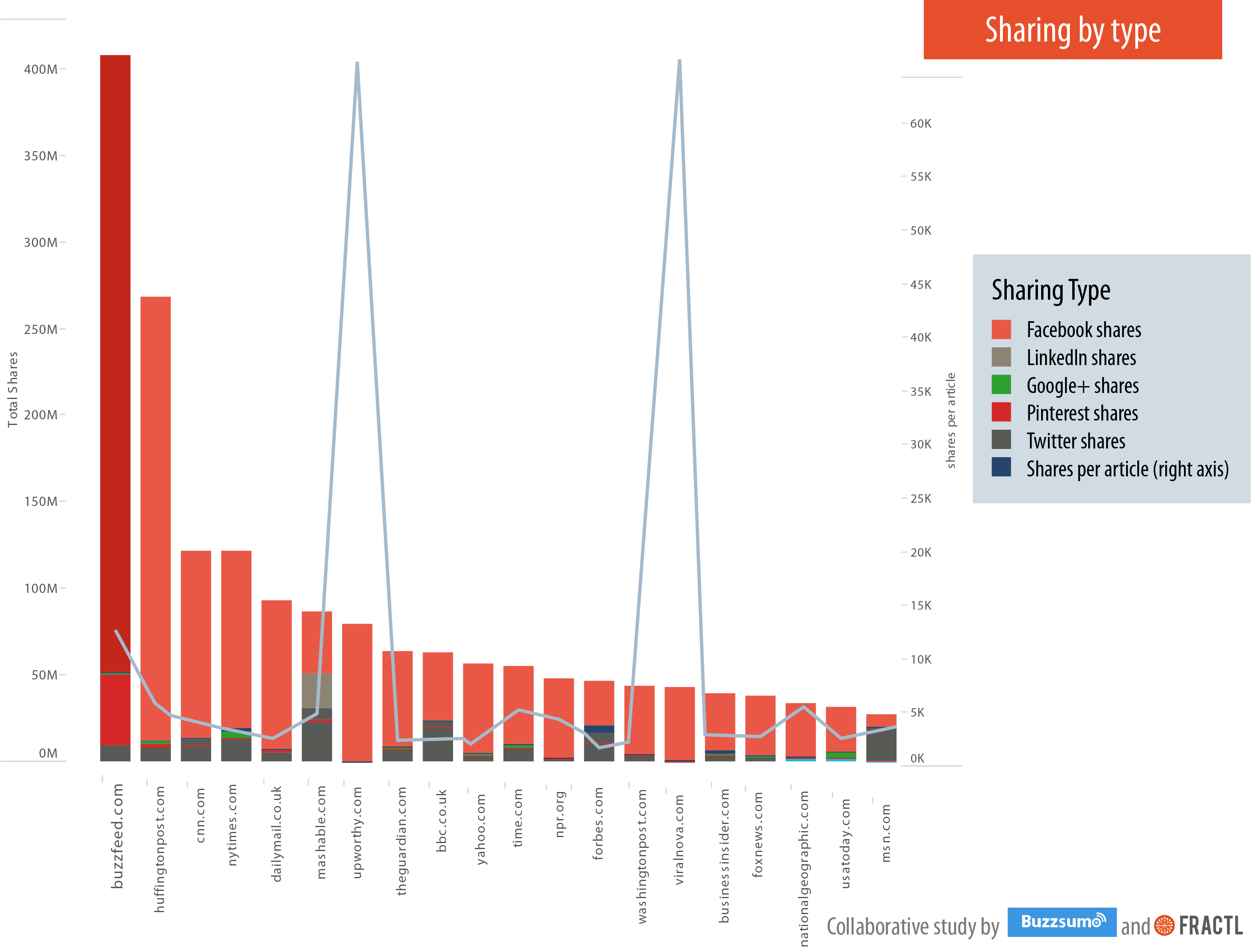 By social network: Not every publisher was successful at pushing their content on every platform. By platform, the most-shared publishers were:

By diversity of network dominance: If success is establishing a strong presence on more than one channel, only five publishers would be winning. Mashable, Forbes, and The New York Times were among the five most-shared publishers on three different networks; BuzzFeed and CNN each earned top-five spots on two different networks. No other publishers earned enough shares to rank in the top five of more than one network.

Not only did we learn that no single publisher has become omnipresent on all social networks—we also found that there is a huge disparity between the share volumes of those in the top spots and everyone else. In fact, the distance between the publishers in the top two spots is more than double the shares earned by the third place publisher.

The sharing rates are dramatically lower the further down the chart we look. Eighty-eight percent of publishers earned less than 25 million shares for all their top articles in the first half of the year—that’s less than 1/16th of BuzzFeed’s share volume.

We also calculated share quantities excluding Facebook to learn whether its position as a powerful amplifier might explain the sharing gap. We found that 89 percent of publishers earned less than 5 million shares on the other four platforms combined—still less than a tenth of BuzzFeed’s shares on Twitter, Google+, Pinterest, and LinkedIn.

The Alchemy sentiment analysis revealed some interesting findings among the publishers: 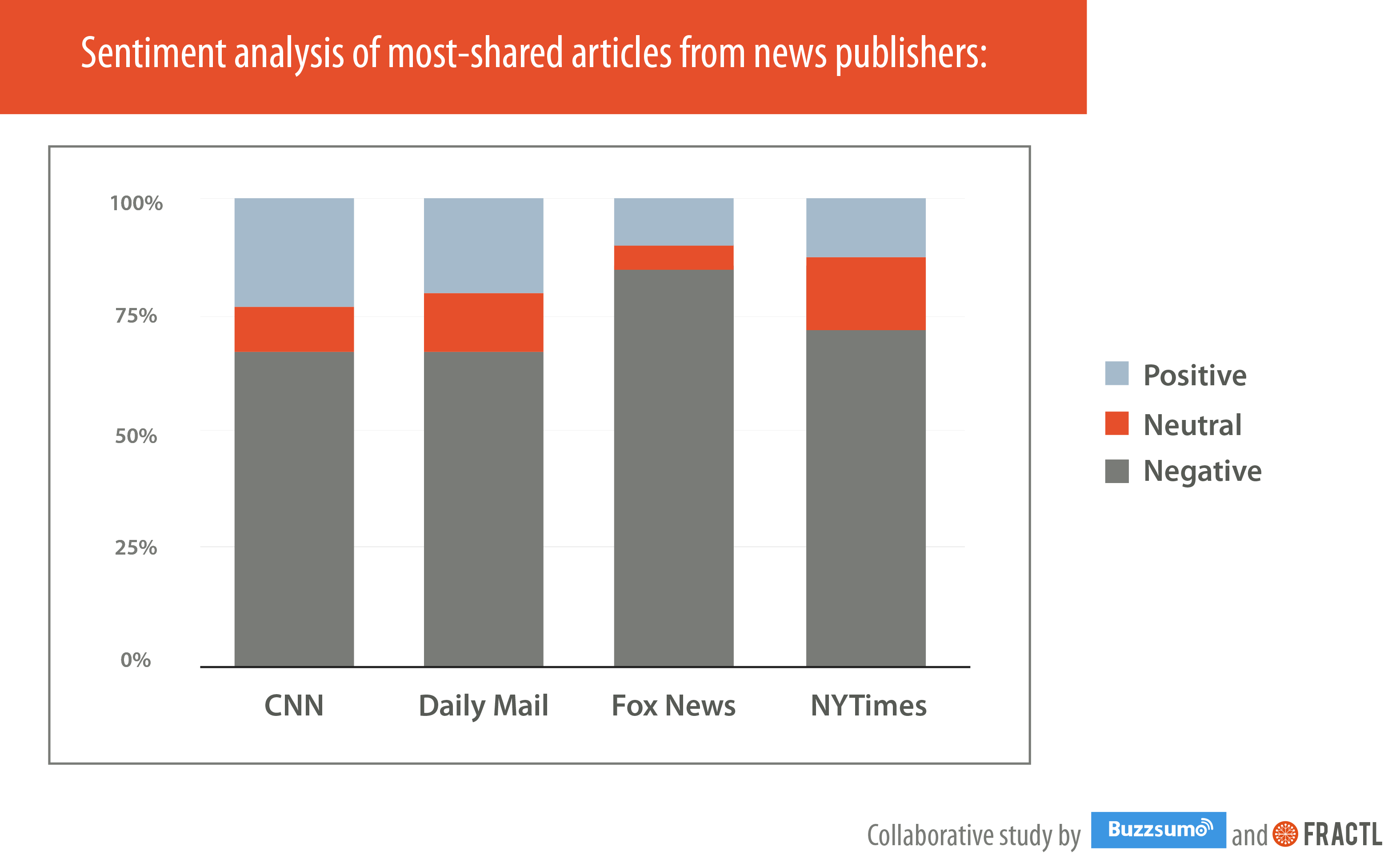 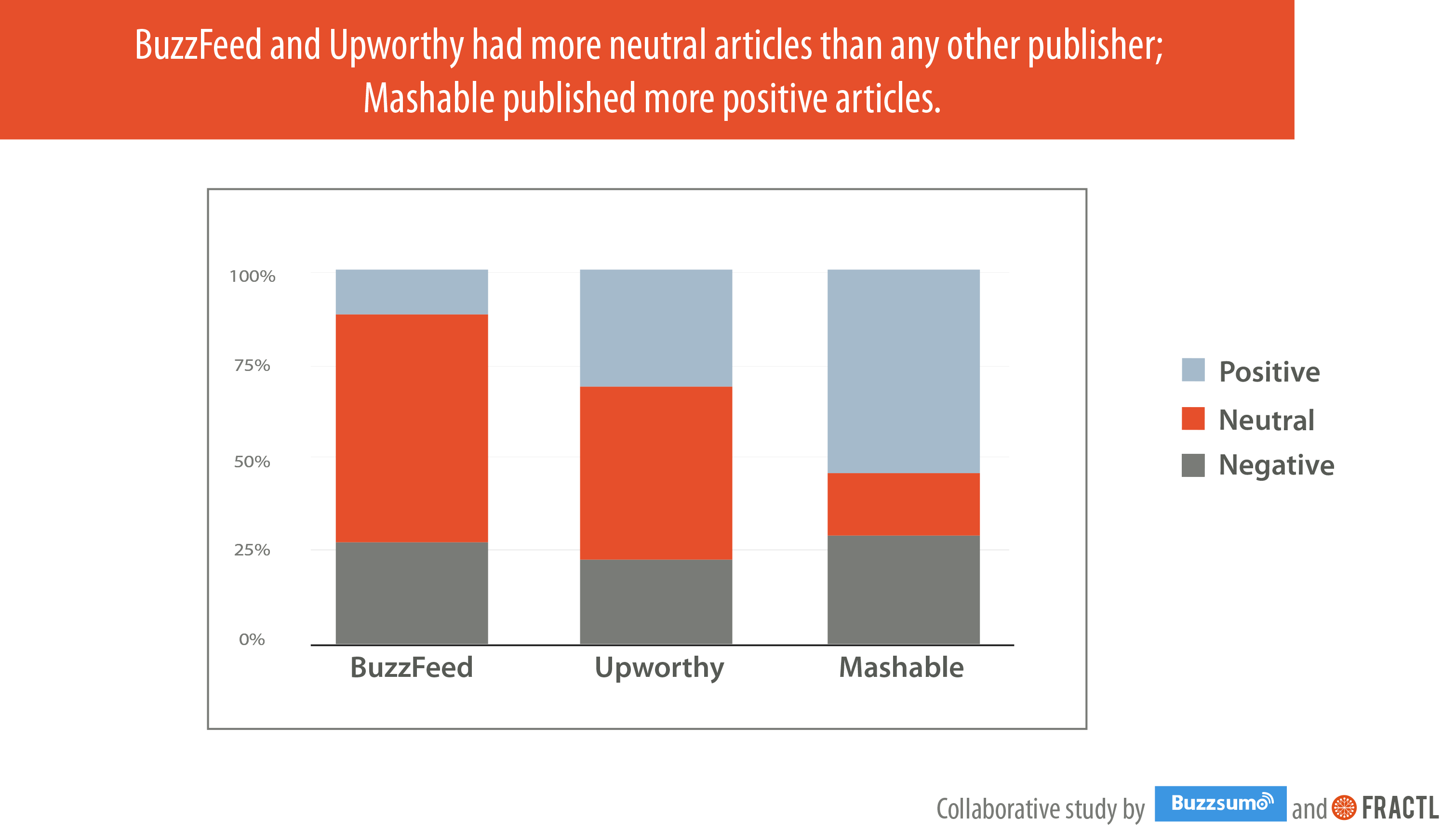 The profile of news organizations, in combination with that of BuzzFeed, is reflective of the sentiment analysis of Facebook. This suggests that Facebook has likely become one of the top priority social media outlets for news sites, as Facebook is the platform where their content resonates most.

Interestingly, Mashable—the most positive publisher—did not rank in the top five most-shared publishers of one of the most positive platforms, Pinterest. This leads us to question how much of a priority Pinterest plays in Mashable’s social strategy.

III. Which Words Work? A Look at the Most-Shared Articles

The most-shared articles on each network varied widely; excluding publishing outliers BuzzFeed, Upworthy, and ViralNova, Facebook showed the most diversity of news, entertainment, and commercial pieces. Beyond that, the most popular articles on each network tended to follow a more narrow scope: Twitter’s most shared articles were primarily focused on pop culture; Google+ shared more world and industry news; Pinterest trended food, health, home, and beauty pieces; and LinkedIn favored professional development and business articles. We found these trends reflected when we looked at the most relevant keywords of the articles shared most on each network:

As you examine which words are shared most on each platform and from each publisher, it might be tempting to wonder whether certain words, topics, or angles transcend all communities or publishers. But here’s the short answer: No. With three exceptions, we did not find any overarching themes when we analyzed the headlines of the most shared articles regardless of author or social media share percentage. What were the exceptions?

Curious to see how the shares break down for each of the 190 publishers in this study? Click here for interactive dashboards of all 2.6 billion shares, organized by publisher, social platform, and shares-per-article.

Kelsey Libert is a marketing VP and partner at Frac.tl . She is a viral marketing and media relations seaker, and she contributes to the Harvard Business Review, Marketing Land, and HubSpot.