Fresh off the heels of this year’s Content Marketing World, many of us are feeling rejuvenated and excited for our industry. There were countless takeaways to be had, but the biggest wasn’t from any speaker. The greatest takeaway I learned was from my content promotion session audience – Google ruined content marketing.

Some might even go so far as to say it’s created a race to the bottom – rewarding quantity over quality. It’s also responsible for the nearly impenetrable wall between digital paid and owned media that exists at so many brands, today (more on this later). The good news is that the problem can be fixed, but it’s going to take some serious rethinking on the part of marketers.

Build It and They Will Come

For this industry, some might say I’m old school. I remember last decade when content marketing was literally a ‘build it and they will come’ phenomenon. That was the age of content deficits in most industries – meaning, there were more people on the internet looking to solve their problems than content to satisfy their needs.

For early adopters of content marketing (think Moz and HubSpot) this proved to be a great time. Search engines drove significant traffic to their websites. The more they published, the more traffic and leads they received. In fact, this held true up until around 2012 for digital marketing as an industry. Here are the numbers I tracked for three years. 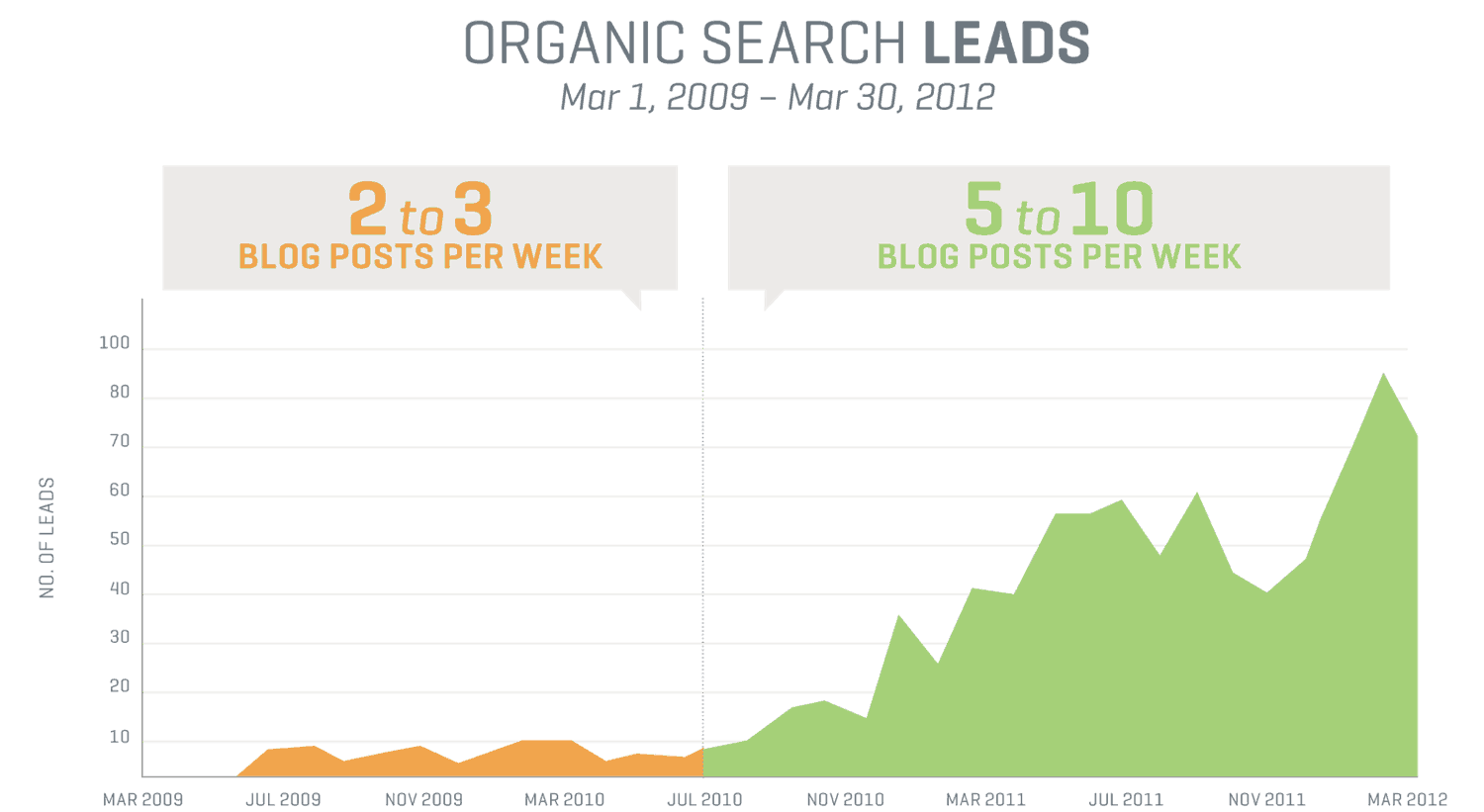 To this day, HubSpot’s own data analysis shows that there’s a direct correlation between total blog posts and inbound traffic. It makes sense, too. Every page on a website represents another opportunity to show up in a search engine.

Steve Rayson, of BuzzSumo, in his article, The Future is More Content, opines this as the long tail theory. He goes into much more detail and legitimizes quantity over quality content as a strategy by using the Washington Post as an example.

While one high-quality article might drive a thousand shares, 10 articles that drive 120 shares each is more. Replace shares with traffic or conversions. It’s the same concept. In this way, Google is actually encouraging us to commoditize our content in lieu of creating great content, whether it’s purposeful or not.

This flies in the face of one of the main overall messages at Content Marketing World. The collective wisdom of the community says that quality always trumps quantity. However, the incentive via organic search isn’t necessarily there.

As a result, tactics like article spinning and press release spam were prevalent as early as four years ago. It’s also the main motivation behind content syndication and bulk curation. Today, articles written by machines and algorithms are quickly replacing those older tactics. It’s all an attempt to take advantage of the long tail, create more content, and drive more traffic via organic search.

Driving more traffic, conversions and shares is well and good, but this strategy likely doesn’t create what Mark Schaefer calls an “alpha audience.” Quality content is what builds an alpha audience, and it’s this audience that drives 80% of the business.

Unfortunately, most marketers’ KPIs are tracked higher up in the funnel. As a result, traffic and top-funnel conversions rule the day. This further encourages us to focus on quantity over quality.

Many in my audience at Content Marketing World complained that they don’t have access to any paid media budget to do native advertising. It’s controlled by the media buyers, PPC, and display. This is why much of the programmatic native ad units we see are so click-batey, contain provocative imagery, or are downright bait and switch.

On its surface, this doesn’t necessarily sound like a bad thing. For years these professionals have been diligently distributing mid to bottom-funnel content and doing it well. Their world even has its own language filled with fancy acronyms that help scare content marketers off – PLA, CPM, PPC, CPA, BMM, CPC, CPP, DCO, DKI, SQR, etc.

The native ad networks themselves have made it difficult for content marketers to adopt them for distribution. They were created with the same language and thinking behind Google’s advertising network. This further encourages content marketers to hand off their top-funnel content to the “PPC guy.”

In this regard, brands need to stop building silos around owned, earned and paid media. It’s understandable why this happened. Last decade’s paid channels of distribution weren’t built for top-funnel content and, for the most part, brands weren’t really creating much at the top. For the ones that did, they could rely on organic channels to get the visibility they needed. That’s not the case anymore.

Content marketers need to own not just top-funnel content, but also the owned, earned and paid channels of its distribution. If not, they’ll be a consistent disconnect between the creative and its distribution and the results will likely be meh, at best.

It doesn’t have to be this way. Our goal should be to create, develop and nurture an alpha audience. The only way that this happens is if we, collectively, focus on quality content while owning all of the channels of top-funnel content promotion.